This one comes to us all the way from Greece. Unfortunately these days Greece's economic problems are even a bigger mess then the legal red tape Rom is caught up in.

Another good piece of Rom fan art done by someone who has excellent figure composition skills when it comes to illustration. Also, I think that may be the the most faithful fan art rendering of Rom's neautrlizer I've ever seen.

4/12 Update: If you didn't see this before it's because I didn't have this in the posting when I first published it last night. Today by chance I found Bill Mantlo's Paradox in a magazine back issue bin for just $3 so I figured what the Hell I'll check it out.  Hopefully I'll be able to read it in the next day or two and add a brief review of it to this posting so stay tuned if you want to know more about Paradox. 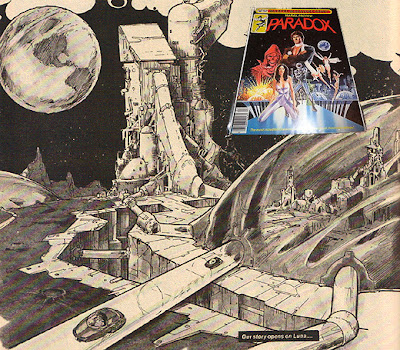 4/13 Update: The setting for Paradox is 200 years in the future in which the entire solar system has been colonized. Earth (referred to as Terra in the story) has genetically engineered a series of new "people" in order to survive as slave labor in the various hostile environments through out the Terran Empire. Paradox is a popular anti-gravity dancer and shape shifting agent of the Interplanetary Security Agency. He is sent from Terra to the moon (which is a large colony now called Luna) in order to investigate the death of the Terran Ambassador to Luna. There he discovers the connection to the ambassador's death to an addictive  hallucinogenic drug called firelite in which the state of euphoria the drug induces becomes more intense as it gets closer to being fatal when it causes the user to spontaneously combust which is called going "ferno".
As Paradox's investigation continues he discovers the connection to the Ambassador's fireflite addiction to a blackmail scheme which was part of planned revolt by Luna's slave population.

It should also be noted that Paradox was apparently a switch hitter as well as a dancer although we only see him being with just women when it came to overt sexual scenes. I liked the premise of the story it was kinda like The America Revolution in space (although in this case Earth was playing the role of England) with some Blade Runner and Total Recall mixed in there. The story read fairly well with themes being touched upon such as drug abuse, racism and human sexuality. I'm going to say that the reason Paradox failed to find an audience is that I don't think readers
of Marvel Magazine Group in 1980 were ready for a leading character that was basically a "James Bond" who was also a ballet dancer that hooked up with guys from time to time. I applaud Mantlo's vision and for what he was trying to say with certain social justice narratives in Paradox but at the end of the day issue #24 of Marvel Preview from Marvel Magazine Group was just a head of it's day. I also don't think it helped win over the predominately male heterosexual readers of Marvel Magazine Group publications to Paradox with what he was wearing through out the issue.