As it turns out I still have my copies of issues #4 (1985) and #10 (1986) the deluxe editions of the Official Marvel Universe Hand Books. Issue #10 contained on the back inside cover an appendix page of other dimensions. It's cool how both Limbo and the Microverse appear almost side by side in the columned entries. Also worth mentioning these issues contained entries for Quasimodo "the living computer" and Ego "the living planet". Both entries included Rom and the Dire Wraith in their bios (about a paragraph for each bio).
Forge's first appearance in the Marvel Universe was in X-Men 186 which was part of a 4 issue X-Men story arc that very directly tied into the Rom series. As you all know around the same time Forge also was a regular ally of Rom for several issues. So needless to say Forge's history had numerous mentions of Rom and the Dire Wraiths as well as a schematic diagram of his hand held version of the neo-neutrilazer.
I'm sure there's other characters in the Marvel Universe who made appearances in Rom spaceknight which also resulted in references to Rom in Marvel Universe Hand Books issues I don't happen to have. Nova, Rick Jones and The Thinker would be a good examples and in the case of the Gremlin his entry actually uses clip art from Rom #44. If you know of any others please don't keep it to yourself. If you were about to mention The Torpedo I'm sure you don't need me to tell you that's a no brainer.

I think this would be a good time to showcase some Marvel Universe Handbook related fan art. Straight from The Microverse this re-paneling of Captain Universe is by John Douglas. The original was done by Steve Dikto who's work on Rom I hated which I've stated repeatedly like a broken record for years now. But in this case I have to admit it's actually not bad. However, Douglas manages to improve on the original while at the same time rendering Captain Universe in a "Diktoish" style. Captain Universe first appeared in Micronauts #8 and was created by Bill Mantlo and one of my all time favorite artists Michael Golden.


Now these are not some comics I found in any discount bins recently. I've read these already and I want to recommend them to you all as some of Bill Mantlo's finest work. Incredible Hulk 286 is actually based on an the original Outer Limits episode "Soldier" which is about a soldier from an apocalyptic future that ends up in the present through a scientific quirk in space and time. Marvel Premiere 28 features 4 of some of Marvel's favorite scientific and super natural freaks who end up being more of a threat to each other then by some mutual enemy. Plus, the issue is great alone just for the panel where Ghost Rider gets pissed and calls Morbius a "half baked Dracula". 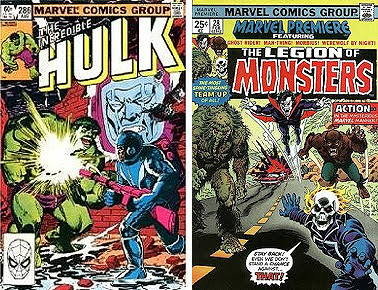