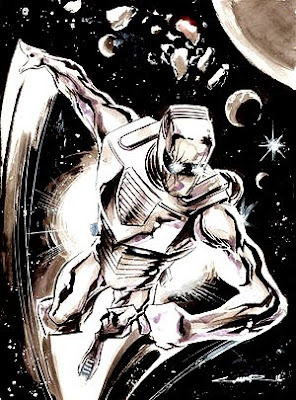 Here's a guy I've been hearing more about in recent months. It turns out that this guy is quite accomplished in the comic book industry. You may have seen him featured in other blogs out there you've visited or go to on a regular basis. Cinar is from Turkey of all places which hasn't been at the top of my list of favorite foreign countries in recent years thanks to the anti-Western rhetoric coming from it's prime minister along with it's close ties to iran. But now thanks to Cinar's work I can say at least one good thing has come from that country.

http://itsadansworld.blogspot.com/2010/10/yildiray-puts-cinar-into-catwoman.html
Here's a real treat for all you Firefall fans especially. I can only assume this one was inspired by ROM #4 and or Marvel Team Up # 99. I wish I knew who did this it's pretty hot (yeah bad pun intended) . Would the real artist for this please stand up? Be sure to magnify this one to get a better look at the details. 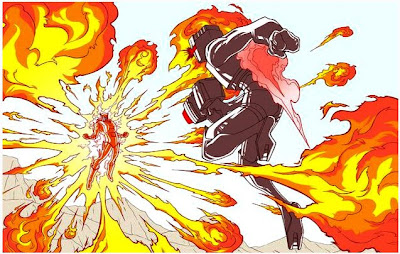 Dire Wraith reference found in Thanos Imperative #5. Thank the Gods of Galador for those 3 for $1.00 comic boxes!

So a couple of days ago I swung by one of the few places that still has those hard to find 3 for $100 comic book boxes. Among the three titles I picked was #5 of the Thanos Imperative. While reading it I noticed the panel below involving a plot line in which the war with the Cancerverse was not going so well for the cosmic heroes of the mainstream universe.

Although no one probably knew it at the time I bet this was a little bit of foreshadowing that Abnett & Lanning were doing knowing that The Annihilators mini-series was coming up soon. What's odd about this reference is the context that it's in. It implies that the Dire Wraiths are in a position to be of any help in the event they wanted to. And although they've popped up here and there over the last 25 years they haven't been any sort of major interstellar power since the conclusion of the Wraith War in ROM #65. Since that issue the Dire Wraiths have really just been pretty much scattered thro 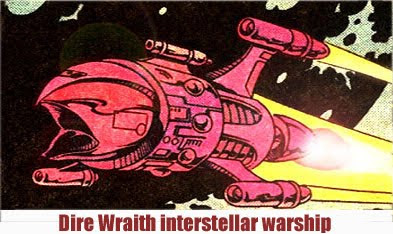 ugh out the galaxy in these disjointed "sleeper cells" causing some problems here and there like in the Darkstar: Winter Guard series or Volx in New Warriors. That is to say it's not as if they could have taken Gladiator's suggestion and mobilized an attack force like they did when they first invaded the Golden Galaxy as told in ROM #1. I dunno maybe I'm just taking this reference too seriously and over analyzing it.

I just found this review of Annihilators #4 that had me cracking up! This guy reviews several other books so it isn't until 6:30 minutes into the video does he start with A#4. But when he does the first thing he goes off on is how he got stuck with Rocket Racoon variant cover even though he got to the comic shop at noon on new comic book day. Can't say as I blame him I'd be pissed too: http://www.youtube.com/watch?v=jKMc-gW_u8I
Posted by Shlomo Ben Hungstien at 12:05 AM 9 comments: