One more card up my sleeve 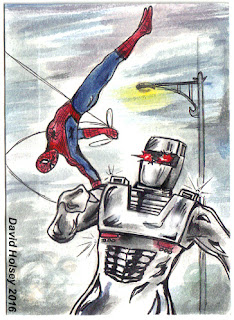 I totally wasn't expecting to do another sketch card any time soon but I saw something recently that gave me almost instant inspiration. But first things first. The closest thing we ever got to see in terms of some kind of ROM and Spider Man cross over was a cameo in ROM spaceknight 23. No doubt some kind of team up story between the greatest of the spaceknights and arguably Marvel's most popular character would have been nothing short of epic for ROM fans. So getting back to my inspiration it came when I saw this black suite Spider Man fan art by my good friend from Greece. It was one of the coolest and most creative web swinging poses I've ever seen and I knew almost right away I wanted to use it some how with ROM. I hammered this sketch card out it just one evening. Don't forget to check out part of the source material from Nikoskap ...
http://nikoskap.deviantart.com/art/Web-swinger-634802666

And speaking of all things cool and Spider Man have a look at what I passed by just last week. This can be found in the city of Hayward at a custom plastics fabrication business called Bell Plastics (2020 National Ave.). But I'm also happy to say that Hayward has been home before to other public art of our friendly neighborhood Spider this can be found on Tennyson Road  Man http://www.itsadansworld.net/2010/09/united-by-style-marvel-takes-dc-to.html

Posted by Shlomo Ben Hungstien at 2:34 AM 20 comments: 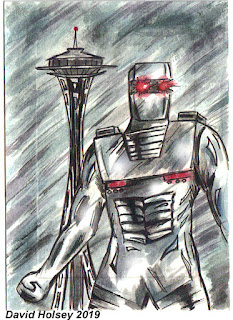 Been meaning to add another sketch card to my collection for a while now but just hadn't been feeling very artistically inspired lately. But with my most recent trip to Seattle I got an idea based on all the souvenir and gift shops with all the Seattle this and Seattle that merchandise but keep in mind I say that with Seattle still being my all time favorite U.S. city. Too bad it's almost as expensive to live there these days as it is in San Francisco. Anyways, that's nothing that ROM would have to worry about so here you have it a silver spaceknight in The Emerald City. Unfortunately, ROM never made it up to Seattle or to The Pacific Northwest in general during his original series but it sure would have been cool. That would have been so awesome seeing ROM use his neutralizer to banish a dire wraith posing as a Starbucks coffee employee. Not too far from reality actually when you think about it given Starbuck's already fairly successful plan for world domination.

Posted by Shlomo Ben Hungstien at 2:35 AM 7 comments: