Adam West passes away at 88

Just heard the sad news (leukemia) a couple hours ago and I wanted to get a posting up this weekend with a little bit of my thoughts on West's career. As a kid I kinda used to like the original Batman TV show because like Spiderman on The Electric company it was one of the very few live action outlets available for some of my favorite comic book characters. As I got older I won't lie I did develop a certain degree of disdain for the show because of it's campyness although I certainly never felt that way for West himself who by all accounts has always been a stand up guy in his personal life.
I'm really glad that over the years he managed to in part rejuvenate his show biz career despite his type casting handicap with voice acting work on The Simpsons and The Family Guy. As some of you may remember he was also the voice actor in The Grey Ghost episode of the Batman animated series. That series brought a lot of critical acclaim and respect to the super hero genre and that episode in particular was certainly one of the best if not the best episode of the series. Ironically, West plays an out of work actor who can't couldn't find new acting gigs due to a type casting handicap but would go on to help Batman solve a series of crimes carried out by some psychotic fan boy using sophisticated remote controlled toys.

Ya know I have to admit even though I came to grow weary of the original Batman TV show I always maintained my fondness for the classic Batmobile from that series (I dug the Batboat to). I used to have the original die cast ones from Corgi but at least I still have a couple packaged ones from a Hotwheels release some 8 or 9 years ago which I saw in a Dollar store of all places. Looking back I should have picked up more of them. As a crime fighter you probably don't want to drive around seated in an open canopy (not much protection from gun fire) but that's ok it was such a cool design I still love it till this day.


NO RETREAT, NO SURRENDER. WE DO NOT SUBMIT.
Just something I cooked up in photoshop this morning that would have been cool if it really had happened.
Posted by Shlomo Ben Hungstien at 12:35 PM 10 comments:

I Love The 80s...except when IDW reboots it 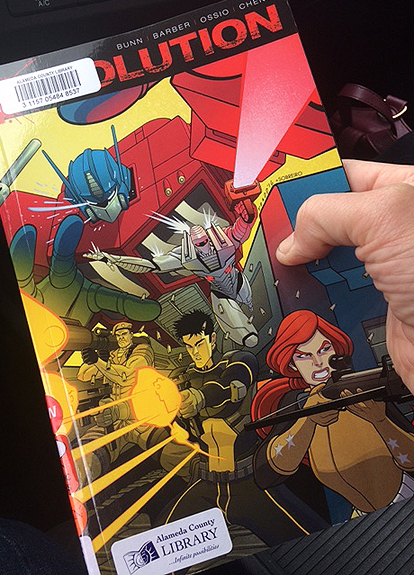 So a couple of months ago I saw this at the library and figured what the Hell I'd give it a read all I had to lose was time. And indeed I did, and those precious couple hours or so of my life are now lost for ever. I was thinking I'd do a review back then but just never got around to it. Going into it I already had issues with ROM and The Micronauts as you all know.
But I also didn't like some of the Autobot line up I would have stuck with Autobots that were just from the first two generation of toys as opposed to these other later and more obscure Autobot characters (Windblade was it?) and I was never into the whole concept of female cybertronians even back in the 80s. And then ofcourse they had to make the Matt Tracker character from M.A.S.K into a black guy. I mean I understand the whole socially progressive thought process behind that but it didn't work for this M.A.S.K reboot in the same way that it did for the Marvel Cinematic Universe and the Nick Fury character. I guess G.I.Joe was handled ok but I didn't give a rat's ass about Action Man.
Ya know when I finished reading this trade I could hardly remember what the story was about it, the whole thing just seemed like a series of splash pages with an incoherent story line. Or maybe it just seemed that way because I just wasn't that into it for the before mentioned reasons and it didn't hardly at all invoke any sense of that 80s nostalgia with me. Kinda like all the Transformers movie after the first one. This whole thing was one big hot mess and felt like IDW threw all these 80s properties into a blender and poured out the hack job results on a printing press. 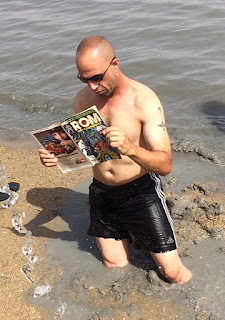 Even when you're knee deep in mud on the shores of The Dead Sea (Israel) it's still a good time to read some classic ROM spaceknight. I'm still trying to figure out my iphone I just found this photo from summer last year in some obscure location in it (the cloud maybe?). So I figured I might as well throw that into the mix here. Aside from the original ROM I sure do miss all things authentic 80s which brings me to the next items in this posting. 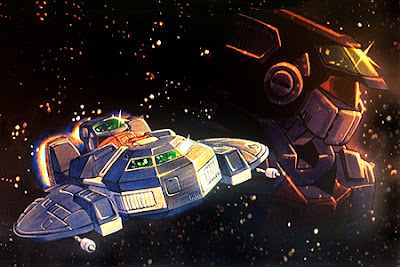 I found this cool Gobots fan art on deviant art a couple weeks ago. Pathfinder was always one of my favorites he looked cool in his robot mode and transformed into one of the coolest vehicles in the collection by far. That was a good 80s toy line it's a shame they never gave them a good back story and on top of that they had a God awful shitty cartoon series. 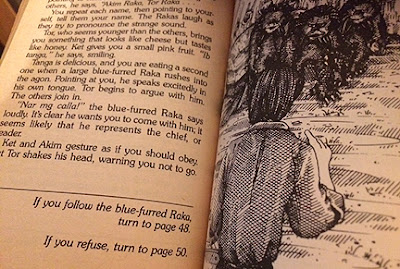 Speaking of authentic 80s awesomeness, remember Choose Your Own Adventure books? They used to have these books in the class rooms of my elementary school. On a whim I bought a copy of Underground Kingdom and it finally showed up in the mail yesterday. Not exactly great literature but still kinda fun to read with a strong dose of nostalgia.

One last thing I wanted to add to this posting. Just saw Wonder Woman today and I just gotta say, I love Gal! I wrote a brief spoiler free review over at The Suicide Squad blog for anyone who's interested....
http://suicidesquadtaskforcex.blogspot.com/2017/06/wonder-woman-review.html
Posted by Shlomo Ben Hungstien at 12:13 AM 11 comments: