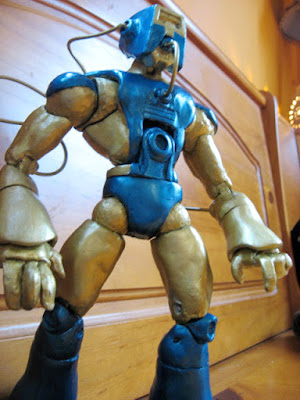 Ya know it's funny, last night about a half hour prior to finding this recently completed custom on deviant art I had just fired off an email to Gary (check your email!) asking him if he had discovered anything cool out there I could post. I would have liked to have seen more of these guys in the original ROM series and I imagine so would many other fans out there. 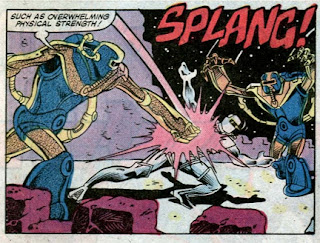 Some clip art from the good ol days.


Well I must say that's a cool display even with the zero issue in it given that I liked the cover art on it at least. But that t-shirt really kicks ass it's more the kind of ROM I want do you recognize the art work in it? If not this should jog your feeble memory...
http://romspaceknightart.blogspot.com/2016/02/sold.html

I had to do a double take when I saw this in the Hasbro Micronauts display. No way this could be some kind of vintage Micronauts box set I never knew about so I think this must be some sort of new release retro kinda thing. Look at that beautiful box art! Very reminiscent of Ken Kelly's classic renderings on not just the original Micronauts toy line box and card art but also for Masters of The Universe packaging and even KISS albums.
Hopefully hasbro will do something cool like this for ROM and at least give us a cool toy since we're not going to get a cool comic book series. Did you know hasbro already made a heromugg out of one of the Visionaries characters? Enough with this heromugg shit already hasbro stop squandering your resources on shitty merchandise hardly any of the fans want.

Posted by Shlomo Ben Hungstien at 1:03 AM 18 comments: 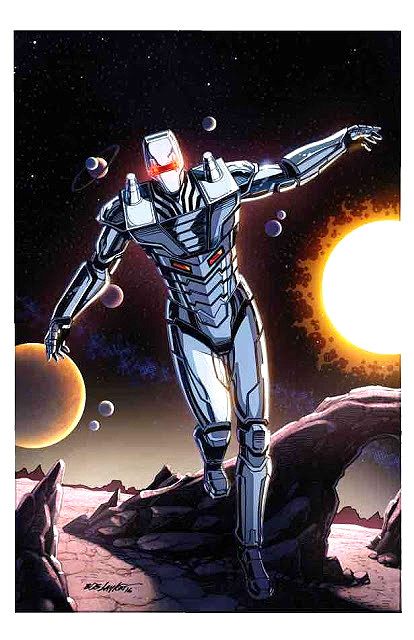 Although I've decided to steer the subject matter of my postings away from all things IDW I'm making an exception on this art work which I just found last night. Here we have one of the countless upcoming cover variants but this one is unique for a few reasons and hence forth worth posting. Like so many of the other cover variants the design for ROM's armor design differs considerably again showing us IDW's complete lack of interest in visual consistency. However, on it's own merits the art work in general is well done plus it offers a full view of an updated ROM design I would have found acceptable for the reboot.
So why do I like this updated look so much more then what IDW settled on as seen in the interior art? In the design on this interpretation by Layton gone is the stupidly shaped head and over sized hands. Same goes for the bell bottom pants feet. Although for those of you who remember Rakk from the spaceknight squadron he had the bell bottom pants look but with him they managed to make it look cool. But in general Layton's design is completely devoid of any anime/manga influence which is a look that does not suite ROM at all. In fact, to me here his armor looks slightly reminiscent of the original Robocop which has me wondering if that had some influence here or if it was purely coincidental? Alas, it's a just a cover when you all start wasting your money on this series it'll be the same old zero issue shit when you flip the pages. And speaking of which . . .


Well thanks to a link in Gary's comment I now have this to present to you all. I just realized when ROM isn't fighting dire wraiths he must be working at the same place I do I have those same boots he's wearing. But mine don't have flight capability. Does ROM get his thrust from his boots when he's in flight? Kinda looks like it but it's not quite clear either. Hey IDW why not just give ROM a propulsion pack fitted to his armor? Oh wait we can't have that it was something cool and that made sense with the original so we have to do something way different now just because. 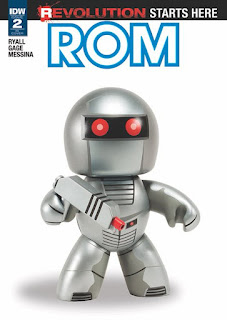 June 11th Update
Unlike Ultron, I can physically throw up into my own mouth which is why I really wished I had grabbed some of the air sickness bags from my vacation flights when I found this on twitter. I guess the hasbro hero mugg as a cover variant should hardly come as a shock to me at this point. But it would make a great surprise gift for The King of Thessaly a.k.a K.o.T
Posted by Shlomo Ben Hungstien at 7:06 AM 26 comments:

This is not Sparta, this is Athens. Sporting my ROM t-shirt in Greece may not be quite as epic as King Leonidas and his 300 Spartans holding off thousands of invading persian scum at the Hot Gates of Thermoplyae or even the naval campaign the Athenian general Themistocles carried out against the persians in that war effort but I still think it's still kinda cool.

And this is Israel's eternal and undivided capital Jerusalem. And that is a copy of Incredible Hulk 256 which is the first appearance of Marvel's premier Israeli superhero Sabra. Written by Bill Mantlo and penciled by Sal Buscema in 1980 which was a better time in history for comic books as IDW's Micronauts #1 and ROM "the" spaceknight 0 issue have proven to us once again. Here's a little something else from later that day in Jerusalem  . . . .
https://www.youtube.com/watch?v=Ww-PSW4afKw 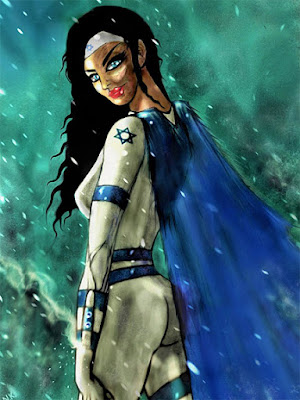 Also wanted to give a big thanks to deviant artist nikoskap for doing this awesome Sabra fan art during my time in Greece. Niko lives on the island of Crete which I unfortunately didn't get a chance to visit but at least we were able to communicate electronically while in the same time zone for a change which was nice. Thanks for this great surprise which I'm honored to post here and for standing with the people of Israel. Sabra is a fictional character ofcourse but in the real world there are many brave women in Israel putting their lives on the line for The Holy Land and it's people. Military service in Israel is compulsory, 3 years for men and 2 years for women. Left click the image to magnify.

On a side note here I wanted to say something about podcasts these days. Is it just me or do they ALL suck? Some of the plane service had Wi-Fi and at one point I tried to listen to some podcasts having to do with the sort of thing we comic book sci-fi nerds are into and everyone I tired to listen to was boring as Hell. In fact it's been years since I last heard one that was any good at all. At one point I tried to give a listen to some having to do with The Suicide Squad and then one having to do with Free Comic Book Day and it was all about as much interesting as watching your computer buffering a video stream.