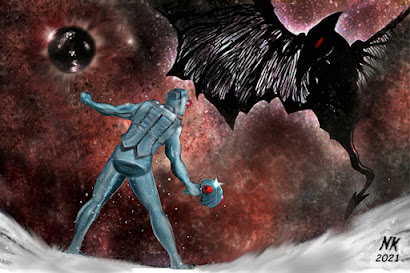 So hopefully you've also seen the original version of this fan art in the previous posting. This past weekend I decided to try out some other ROM related fan art source material from the same artist and photoshop it into the piece in the last posting. I think it turned out pretty good, we now have a version of the Galadorian Horror Story in which ROM is facing a more defined and familiar threat.

Well I supposed with Thanksgiving being a bit later this week I should make a mention of what I'm thankful for this year. There's the obvious stuff ofcourse such as having my health and gainful employment in the midst of this never ending pandemic. But I'm also thankful for BILL MANTLO who just turned 70 earlier this month. Without Mantlo, the 80s would have been a bit less awesome and his legacy makes it possible for us to still enjoy reading and re-reading his stuff today not to mention the inspiration for all this ROM related fan art that's still being put out in the here and now. 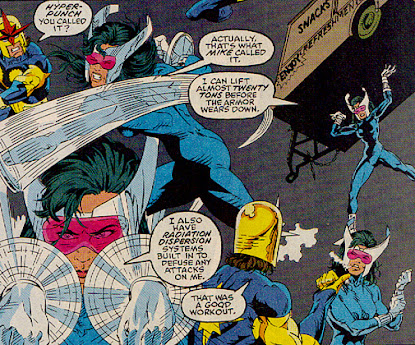 I'm gonna make another addition to this posting. Here's something I've been sitting on for a while now that I never got around to posting for whatever reason. It comes from New Warriors 35 (1993). I only came across this as a back issue a few years ago but when I read it I realized how much more abilities the torpedo armor gave it's user then we knew of when Brock Jones was using it in the ROM series. As the reader you can draw your own conclusions why that may have been but I'm guessing the writers of New Warriors came up with some of that for the sake of making Turbo a bit more interesting and or formidable.

Posted by Shlomo Ben Hungstien at 9:10 AM