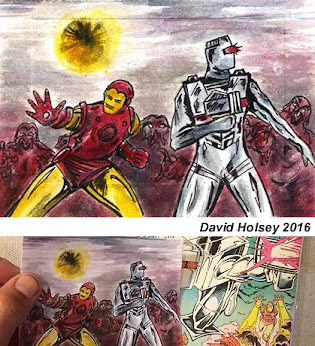 After nearly a year delay the over sized hard cover COMIC BOOK FEVER from Twomorrows Publishing (Back Issue Magazine) finally came out. And thanks to Gary again who's already got his copy we now know about the ROM related stuff in it. It has me feeling kinda sentimental which in turn is bringing out my creative side after it's been on a bit reclusive in recent weeks. Aside from that doing something with ROM and Iron Man has been on the back burner for quite a while.

Getting back to Comic Book Fever, it's compilation of the comic book industry from the mid 70s to the mid 80s and it includes a 3 page chapter devoted to ROM. One page is just a splash page with the doll with star field background but the other two pages are editorial and include some clip art from the original series. The information for the most part is redundant although it also has some new commentary from editor Joe Duffy about her experience with working on the original ROM spaceknight series.
Now ROM does turn up in other sections of the book and it was a chapter on Sal Buscema where I found the most interesting ROM related information. When it comes to the behind the scenes talk in regards to the original series the most interesting thing to me has always been what effected me the most as a fan and reader back in the day. And that is, Sal's departure from the series which gave way to a very low point in the art work on the in the series. The quote seen above seems to suggest that Bill Mantlo and Sal may have had some creative differences very early on in the series which ultimately came to a head a few years later. Just imagine if Sal had penciled ROM spaceknight 65 it would have made the wraith war conclusion so much more epic. You can preview some of what's inside of Comic Book Fever here . . .
http://twomorrows.com/index.php?main_page=product_info&cPath=95_94&products_id=1195 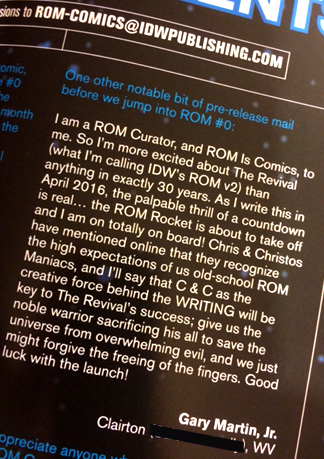 August 28 update: I noticed a copy of the 2nd issue for the IDW ROM in name only series and while I was browsing through it a certain familiar name got my attention. By April of this year my enthusiasm for this new series was buried under 50 feet of shit in a casket made out of utter dismay and disappointment. But I'm still going to post Gary's letter because it's his birthday today and he's also such an all around stand up guy. Happy Birthday Gary and welcome to the published letters club.

Big thanks to ROM curator Gary Martin Jr. for finding this in the letter column of BACK ISSUE Magazine 88 (May 2016). I had actually forgotten about having written this letter which as you can see was in response to BACK ISSUE Magazine 82 which had a long article about the Secret Wars series both I and II (see blog link below). Ironically I had picked up issue 82 because that issue had a letter of mine in it as well which was feed back from yet an earlier issue featuring The Micronauts. Unfortunately all print copies of issue 88 are sold out so for now I won't be able to get a copy to add to my growing collection of comics and magazines that have my letters published in them. I didn't have any luck on ebay either that blows.
http://romspaceknightart.blogspot.com/search?q=back+issue+magazine

August 20th Update: Just found this Spanish language cover art for ROM 72. Aside from the obvious (spanish and not english), notice some other differences from the original? The left hand corner art has the Beyonder instead of ROM and instead of the little Secret Wars logo dog eared in the opposite corner they have a tag line running along the bottom. For those of you who don't have a copy of the original here's a link for a quick reference to compare...
http://marvel.wikia.com/wiki/Rom_Vol_1_72
Posted by Shlomo Ben Hungstien at 2:39 AM 5 comments:

How they could have made ROM great again

This morning I came across this cover art for one of the myriads of cover variants. This particular one is one of the few examples of the endless interpretations of ROM that IDW likes to keeping putting out there. Apparently some sense of consistency with ROM's design when it comes to these cover variants is not much of a priority. However, it so happens that this particular interpretation represents what I think would have been a good or at least acceptable updated look for a 2016 ROM spaceknight series. We'll assume he doesn't have the over sized anime feet bell bottom look going on in here but that aside what you see here is a look I could have gotten into. I'm at such a loss to understand why this kind of look couldn't have been just as marketable for a new ROM series here in 2016 same as what IDW ultimately came up with not to mention it would have gone a long way to not alienating so many of the faithful such as myself. Especially if they had stuck with the original concepts for ROM's neutralizer, analyzer and translator barring some minor design updates. And to think IDW actually had something like this at first (zero issue cover) but continued to make more design changes until they ended up with what you now see when you actually open up the zero issue and ROM #1. It just blows me away that these concepts and final decisions for this new series were made by old school ROM fans. And now, some of my favorite moments in terms of art and writing from the one and only Greatest of the spaceknights. 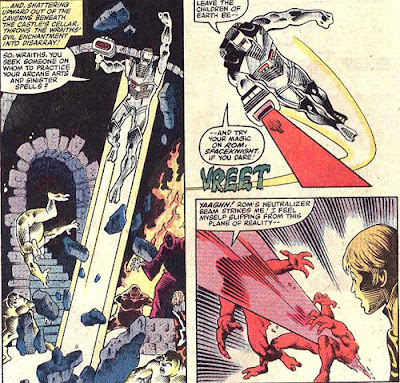 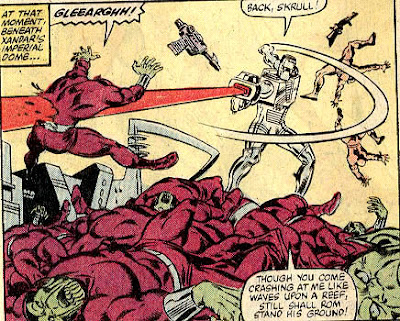 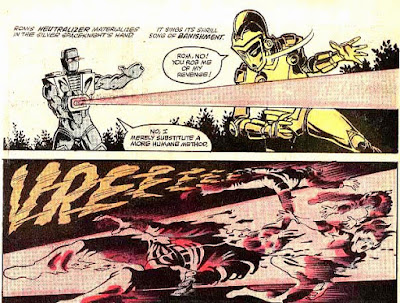 August 11 update
Here's a little something from the good ol days that turned up on deviant art if you want to see more with different angles go here http://custom777.deviantart.com/ I'm sure Chris will be happy to tell us more photos about his latest custom including what he used as the base figure and so on. Also, be on the look out for a recent Rainbow spaceknight custom figure when you're in Chris's art gallery.

Posted by Shlomo Ben Hungstien at 11:24 AM 8 comments: