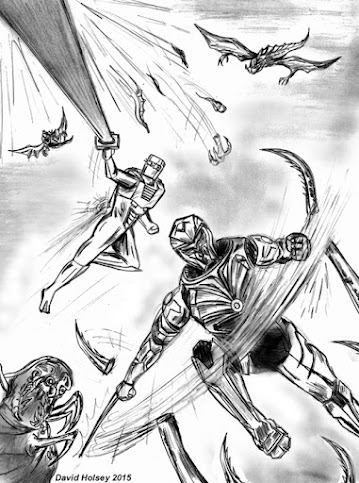 I'm hastily throwing up this posting before I hit the sack tonight. For now just check out this very interesting article about the character known as Onyx. It'll be pretty obvious right away why ROM fans might want to take notice. Updates for this posting to come for sure especially if I decide to get a copy of #1 http://www.sidekickcast.com/is-onyx-more-than-just-a-rom-spaceknight-knockoff/

After doing a bit more online research I also found this 5 page promo that was running in several IDW titles leading up to the first issue of Onyx. So what do you folks think of Onyx so far based on this promo clip art along with the opening pages of issue #1 as seen in the link above? . . . .
http://www.bleedingcool.com/2015/05/02/onyx-0-a-5-page-preview-from-chris-ryall-and-gabriel-rodriguez-for-free-comic-book-day/

July 31st Update:
So I picked up a copy of Onyx #1 yesterday and I'll have all of you know it's the first time in about two years that I've bought a brand new comic book. The last time I bought a new comic I was excited about I saw Galador get destroyed within the first 7 pages (Infinity#1) and I was like "fuck this shit!". I'm not gonna do a review here because if you've read the pages that the links above go to then you pretty much have the story line in the issue save perhaps a little more action and character development.
But there are a couple other cool things I wanted to bring to your attention. Did you happen to notice the thank you message on the front inside cover that included among others Sal Buscema & Bill Mantlo along with information on how to help Mantlo with his ongoing medical care? And speaking of our Pal Sal one of the back pages features a gallery of all 9 cover variants for Onyx #1. One of which was done by Sal and it bears a strong resemblance to a certain cover done by Frank Miller in 1979 for another silver cyborg who had just made planet fall on Earth. Last but certainly not least in the back pages is an editorial page summarizing all the influential sources in the making of Onyx but none of them get as many mentions as ROM spaceknight. All that aside I thought the issue was a fairly good read on it's own merits as a sci-fi comic and thus far I intend on picking up issue #2 unless something drastically changes like steve ditko taking over the penciling duties or some shit like that.

Posted by Shlomo Ben Hungstien at 3:02 AM 10 comments: 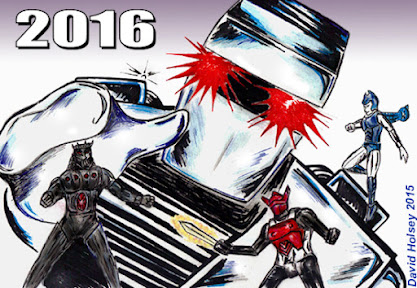 July 18th Update:
And from the artist (Ron Joseph) who gave us the ROM vs The Herculoids sketch pages here's his latest fan art. Spaceknights are awesome but after looking at this one from Ron I doubt I have the "right stuff" to become one even if genocidal monsters like the dire wraiths or ISIS (actually those jihadi fuckers are trying to) were looking to take over Earth . . .
http://ronjoseph-artist.deviantart.com/art/ROM-the-man-the-machine-547243354 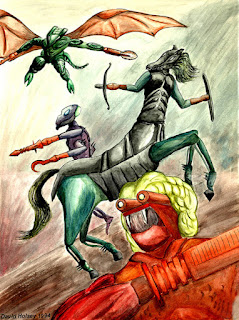 July 21st Update:
Can't believe after all these years I've had this blog and with all The Micronauts stuff I've posted that I never bothered to feature this retro art work of mine. But I guess I might as well now with what's coming next year. This is an 11 X 17 water color painting I did back in the mid 90s of the Micronauts Aliens line of action figures. I'd love to see IDW make good use of them.

July 24th Update:
Just happened to have come across this custom figure of Stardust. Talk about a custom figure that visually looks just like the way the character was drawn in the comic book issues they appeared in! If your memory is a bit hazy Stardust was a villain written for and first appearing in ROM Annual #1 (front story) with a brief and much later appearance in the pages of Quasar see link below for a quick recap . . .
http://romspaceknightart.blogspot.com/2012/10/quasar-4-with-rom-spaceknight-tribute.html

Posted by Shlomo Ben Hungstien at 9:59 AM 23 comments:

ROM vs The Herculoids comic book page layouts that WILL BLOW YOUR MIND!!! 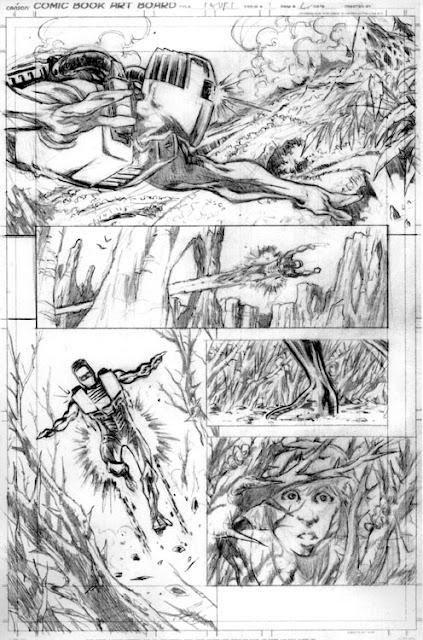 Seeing this right on the heals of the breaking news from IDW is starting to get me pretty stoked about 2016. Want to know who did this and why? Wanna see the other pages to this story line? Then follow the link bellow, nuff said!
http://www.penciljack.com/forum/showthread.php?129625-ROM-vs-THE-HERCULOIDS

July 16th Update: Check out this Vimeo video of the Hasbro IDW joint announcement about the ROM and The Micronauts 2016 projects at their Comic-Con panel last weekend . . .
https://www.idwpublishing.com/idw-publishing-announces-rom-and-micronauts-comics-to-launch-in-2016/
Posted by Shlomo Ben Hungstien at 2:30 AM 16 comments: 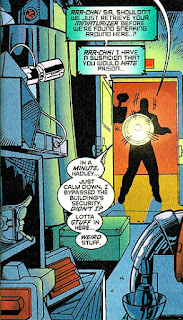 So here we have a panel containing some Easter eggs from the 1998 Fantastic Four X-Men crossover annual which I'd never heard of until Gary Martin Jr. "a Rom curator" (thanks Gary) sent this my way. Just to be clear the Easter eggs were placed in this panel just for shits n' giggles it makes no sense from a story stand point that ROM's neutralizer and anal-yzer would be in this store room on Earth years after the events of the ROM spaceknight comic book series.

Most of you have heard of this Venom spaceknight crap by now. Even if there's any sort of ROM related continuity to it which I doubt, I assure you it'll be as irrelevant as the brief Hybrid appearance or that "Disavowed of Galadoria" (renegade spaceknights from Nova 15 vol. 5) crap from last year. It's much to do about nothing as I'm sure will be the rumors about a new spaceknight mini-series (see previous posting). I hate to be Mr. Doom and Gloom here folks but the decision makers at both marvel and hasbro thus far have shown no real interest in ever resolving the insufferable rights issue which means cool fan art and some uncovered treasures from the past are mostly all we're ever going to have to look forward to. However . . .

On some what of a high note we do have something coming from a publisher that has not been one to shy away from printing ROM's image in the last year or so (legal issues be damned!). As if October wasn't a long enough wait as it is the release date for this has now been pushed back to December (sigh). Anyways, I would urge you all to take a few moments to read the synopsis of this book and why ROM fans and in general fans of Marvel Comics from the mid 70s to mid 80s should look forward to it.
http://twomorrows.com/index.php?main_page=product_info&cPath=133&products_id=1195&zenid=df6urmb7iptt78l6qbbidkrq82 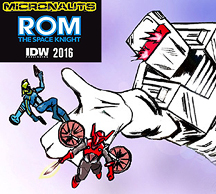 July 10th Update:
For those of you getting all excited about the alleged IDW Publishing advert for ROM & The Micronauts in 2016 you might want to take a cold shower for now. There's some things you need to consider first. See the opening remarks in the comments section.

July 13th Update:
Believe me folks the irony of this news from IDW coming on the heels of this posting about a gloomy forecast for ROM return prospects is not at all lost on me : ) But now that we know it's not a hoax I have 2 words for IDW . . "good luck" . . to be followed up with 3 words . . "don't fuck up". Although it appears I may have been a bit too harsh with Hasbro over the last year about they're efforts to facilitate his return in comics I still think their ROM heromugg doll blows. As for marvel, fuck you and your no ROM having supposed upcoming spaceknight mini-series no one gives a shit about that any more then they do about your lame ass Venom spaceNOT garbage. On this blog marvel is a Persian messenger and I'm the King of Sparta.
Posted by Shlomo Ben Hungstien at 1:10 PM 19 comments: