RINO the spaceknight issue 1 has arrived

It's so disheartening to see what has ultimately become of the legacy today of the original ROM spaceknight series. Take the term spaceknight for example. It seems like any cosmic crusader can claim that title these days from Venom to some no names in the Guardians of the Galaxy series or even by some "disavowed of Galadoria" chumps getting their asses kicked by the fake Nova Sam Alexander. As far as I'm concerned this ROM in name only "the" spaceknight is just the latest illegitimate incarnation the only difference is it comes from IDW publishing instead of Marvel.
But all that being said this posting is for the purpose of soliciting feed back from those of you who decided to buy the first issue and have read it. Did it suck? Was it surprisingly good (highly doubtful)? Not great but better then you expected? And of course I want to know the why behind your opinion. Personally I've seen enough between the zero issue and the previews pages from issue #1 not to mention my correspondences with whoever handles the letters at IDW to know this supposed ROM reboot is not for me but I still want to hear from you.

Ya know I really gotta wonder when a review of #1 is done by someone who claims that ROM has nostalgic value from his child hood but writes stuff like this "His design is a bit updated, leaving the beloved mitten hands behind but ROM’s Analyzer and Neutralizer weapons make a triumphant return". A "triumphant" return, really? It gets even better as he goes on to say "Well, this version from IDW is definitely pulling all the right nostalgia strings for me". This guy might remember seeing some ROM comics on the shelf back in his child hood and maybe he browsed through some but anything more then that I just find hard to believe http://www.firstcomicsnews.com/?p=227609 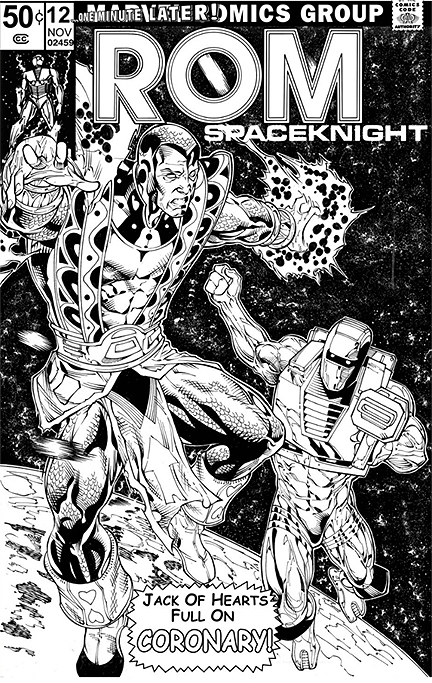 This commission fan art piece just recently showed up on the internet today. Nicely done I must say! I like fan art that takes some imagination even if it's just about creating a different way to visualize a scene. There's something a little more to it then just ROM by himself flying in space or on an action pose I'm so burnt out on that shit it's like how many times can you re-invent the wheel? Not to mention that the artist here (Kevin Sharpe) really knows how to draw people this doesn't look amateurish at all. Also awesome is that this is classic ROM not IDW R.I.N.O. Now you might be saying to yourself you'd like to see this in color but I for one like it just fine in black n' white I was never a big fan of the original Jack of Hearts costume.


Seeing this is almost like getting hit by a super charged bolt of Marvel 80s nostalgia isn't it? Especially after having seen some of the work in progress photos first. Quite a contrast I'd say from the first time I saw hasbro's heromugg for ROM or after the first real look at ROM in the interior art for IDW's zero issue.

Got a same day update going on right now. I just got home after having bought a 2006 Honda Civic EX 2 door coupe. And I'm happy to say I finally found the perfect spot to put my ROM sticker that Gary sent me back in November of 2014.

So as you can see there's a lot going on here aside from ROM being one of the onlookers to this epic DC/Marvel cross over battle between these two major bad guys. Ironically another cosmic marvel fan art piece turned up deviant art only a couple days before Dann's that included ROM, Galactus, Silver Surfer and Thanos but that artist never replied to me me unlike Dann so fuck em they only get a link as opposed to having their stuff actually featured here in this posting. There's just something to be said for social media etiquette it's just a thing with me  . . .
http://emmanuelmerlotti.deviantart.com/art/Rom-Spaceknight-by-Emmanuel-Merlotti-619409778 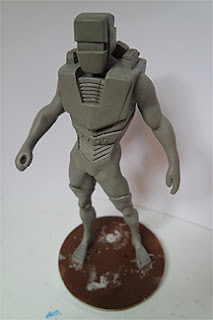 On the other hand this guy did get back to me from deviant art. So guess what? He gets to have his nice work in progress sculpture featured in this posting. More views from different angles can be seen here http://silent-cell.deviantart.com/

If you're thinking about buying all the IDW cover variants buyer beware. Pay attention to the most recent comments in the previous posting Gary has left IDW's shameless greed seem to know no limits.

Posted by Shlomo Ben Hungstien at 8:37 AM 8 comments: