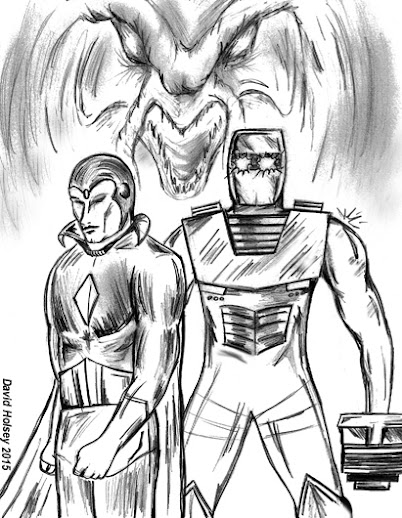 What a difference a nice chill weekend makes when it comes to bringing out the best in you artistically. The 3 or 4 of you who took the time to read my last posting have some idea what inspired this piece. But aside from the Wraith War events and references in the pages of Avengers 243, 244, 245 and 251 we also see The Vision and other members of The Avengers among the large collection of Marvel Superheroes appearing in the final show down in ROM#65 and 66. If your memory on that is a bit hazy here's a splash page to clear things up even though it was unfortunately rendered by steve ditko who's work at the time was absolutely horrible http://www.itsadansworld.net/2010/03/moments-in-cool-cap-leads-heroes-of.html

June 24 Update: Just a little something I did as a thank you gift for someone who's also a big Transformers fan. I think that's gonna do it for June, nothing as of yet for July postings but let's see if anything turns up in the coming weeks.

4th of July Update: Well folks get ready for the next disastrous attempt by marvel comics to publish more ROM related continuity. Apparently there's another "ROMless" spaceknight series over the horizon. But now that marvel has also destroyed Galador (Infinity #1 2013) one wonders what kind of crap their gonna come up with this time to further sully ROM's legacy. . .  http://www.bleedingcool.com/2015/06/29/marvel-to-publish-a-rom-less-space-knights-series/
Posted by Shlomo Ben Hungstien at 8:47 AM 18 comments: