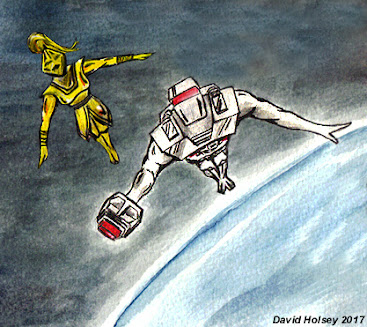 For the past couple days I've been doing some experimenting in photoshop with combining elements of past fan art projects of mine to create new scenes. I got some pretty damn good results if I do say so myself the source material is all stuff I've posted here over the years but I'll provide you with links to my deviant art gallery for easier and quick references of the before mentioned source material ...
http://csuhsux.deviantart.com/art/Rom-spaceknight-Silver-Surfer-Nova-Quasar-368979222
http://csuhsux.deviantart.com/art/Spaceknights-over-San-Francisco-528693529 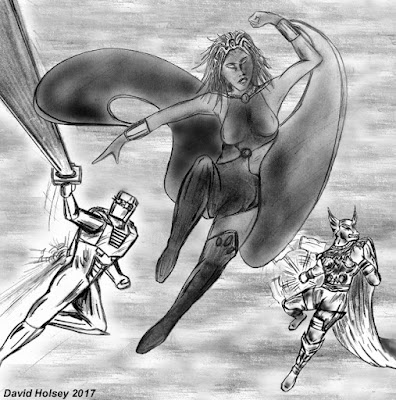 http://romspaceknightart.blogspot.com/2017/02/x-men-vs-dire-wraiths-tribute-art.html
http://csuhsux.deviantart.com/art/Rom-spaceknight-and-Onyx-team-up-sketch-art-550782374
http://csuhsux.deviantart.com/art/Rom-spaceknight-Beta-Ray-Bill-team-up-sketch-art-485359416
By the way deviant art just recently was purchased by Wix which is an online do it yourself web page building site perhaps you seen their TV commercials? As I understand it it's mostly used by business owners with no web skills to build professional looking websites for their business on the cheap. Turns out Wix is an Israeli based company which I had no idea about it always makes my day to learn more about the robust business dealings between America and Israel. I'm sure deviant art will be in good hands.

March 12 update: No you're eyes aren't playing tricks on you if you've previously visited this posting I swapped out this photo image with the finalized product. Each side panel has a mirror opposite as far as the art work goes so effectively you're actually seeing the whole thing in this one photo. 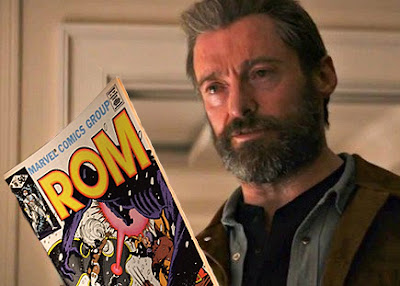 March 4th update: So first of all I just wanted to say that if you thought this movie based on the trailers was gonna be anything like the other Wolverine solo movies then you're an idiot. It most certainly was not, and I mean that in the best possible way. This was a very serious and melancholy film that at times got down right depressing. Part of that had to do with it dealing with a lot of of serious social themes such as coming to terms with growing older and the emotional challenges of caring for the elderly. Things I think more of us are dealing with these days then care to admit.
The movie had as expected a lot good action scene which I think were the way Wolverine fight scenes should have always been portrayed all along. You don't just see him swinging his claws at someone that just falls over I mean we're talking full on dismemberment Conan The Barbarian style. We also get a lot of good trash talk humor that's anything but campy especially with Charles Xavier dropping a few "F" bombs here and there which alone is almost worth the cost of admission. At times the feel of the film was much like Steven King's Firestarter (great 80s film) with the whole little girl with super powers on the run theme in which you knew it was just not going to end on a happy final note. There are those who would say that the story line is a bit slow paced at certain points and I think there's a case to be made for that but this was a really strong character driven movie. Characters with a lot of history that we all love who are going through a crisis unlike any we've ever seen with them before you can't make that feel rushed it needed to be handled right.
Finally, everybody in the film was great with especially powerful performances from Hugh Jackman and Patrick Stewart with Dafni Keen and Boyd Halbrook also handling their roles quite well. Although not the more high society sophisticated James Bond type villain as we know him from the comics I also liked how they handled the Donald Pierce character (Halbrook). He was more of a wise cracking down and dirty mercenary type but it worked pretty good for the story. Are there things I could nit pick at in the movie? Yeah sure, but nothing that serious that takes much away from what the movie has going for it. The end was kinda predictable but still managed to be fairly suspenseful and in the case of Logan himself rather ironic. If you want to discus the movie in any more detail go ahead and leave a comment, remember when you guys used to leave comments?

April 11th Update: This fantastic comment was found under a recent Bleeding Cool article about some law suit that is or was going on between Marvel Comics and idw publishing over the legal rights for usage of the term Dire Wraiths. Personally I could give a rat's ass about the law suit since marvel hasn't done anything with the Wraiths in years that was worth a shit and don't even get me going again on idw's shitty ROM reboot.