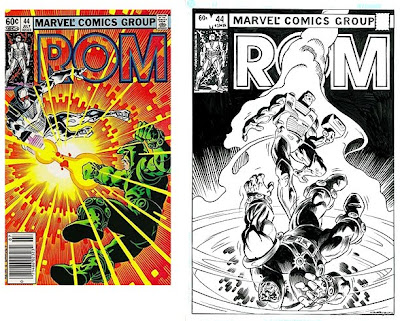 any corresponding information with the cover variant art work so I don't know if this was something that Garvey came up with back then as an alternative or if this is more something he did years later as an after thought. Akin & Garvey were the inking team that so amazingly complimented Sal Buscema's amazing penciling from issues 36 through 50 (October 1982 - January 1984). That was hands down the best period in terms of interior art for the series.
The uncolored panel to the left is from ROM #43 (1983). This is one of the best examples of what I'm talking about when I say what an amazing team these three artists were together. The sense of horror and shock is so well conveyed through Buscema's penciling with the extra added benefit of the bold and rich ink lines giving the image almost 3-D effect. No doubt most of you will recognize this as the ROM clone that resulted in the ill fated bargain he struck with Quasimodo The Living Computer. Be sure to left click and magnify the images.

This posting was going to be for February 1st but I bumped it up to today in favor of my "Postcards from Galador" posting to kick off next month with. Your all gonna love it I promise.
Posted by Shlomo Ben Hungstien at 12:02 AM 9 comments:

New ROM fan art (acrylic & crayon) by Marcelo of Sao Paulo Brazil and that's not all! 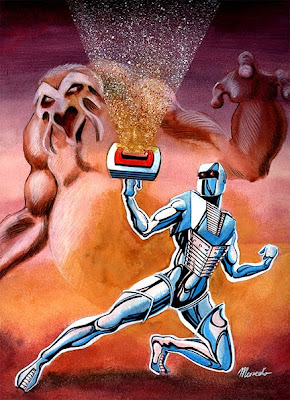 Sorry I haven't been around for a while. To be honest with you all I haven't been too sure what direction to take this blog since the sobering news from Bill Rosemann about Rom's future with Marvel. I really don't see myself bothering to blog about endless dead end rumors about a return. Same goes in regards to upcoming Rom related goings on in the contemporary Marvel Universe since I haven't been too thrilled with much of it such as in the case most recently with Hybrid in Avenger Academy. So for now I'll just be posting cool new fan art as it comes to me and of course if anything of interest comes along having to do with Bill Mantlo I'll most likely share that with you all as well. 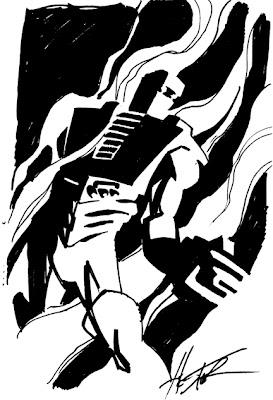 Convention sketch by Phil Hester
Be sure to be back here March 1st as we check out some Rom commission art by Brian Garvey of the dynamic inking duo Akin & Garvey!
Posted by Shlomo Ben Hungstien at 12:03 AM 5 comments: 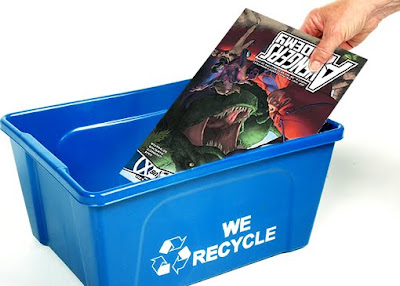 I swung by a comic shop on my way home from work last night. While browsing at some random stuff I took a look at Avengers Academy #25. At one point in the issue one of the characters informs the others that Hybrid was defeated before by a spaceknight's weapon that disintegrated Hybrid and sent him to Limbo. After which another responded with "Where do we find him?". The reply to that is, "We don't, he's dead".
How about that? It all but sounds to me like those sons of bitches at Marvel pretty much hammered in the nails to Rom's coffin. For a moment I was actually considering picking up the issue so that I could scan and post that conversation but I just wasn't in the mood to give Marvel any of my money. In fact, I have no intention of buying any more new Marvel comics indefinitely I'm so pissed. If you go back a couple of postings ago I had already decided to disregard Avengers Academy 23-25 along with a few other shitty ROM spin off continuities in a concept known as Krypton-Revisionism http://www.economicexpert.com/a/Krypto:revisionism.html 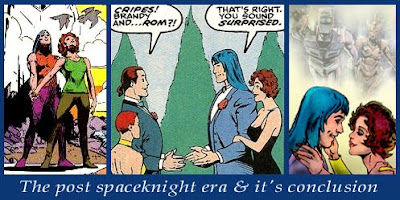 Here's my letter to the editor William Rosemann:

Avengers Academy #25. Cmon guys what was that!?

The Hybrid 3 issue story arc seemingly started off as a tribute to Rom spaceknight but pretty much ended up being a slap in the face to old school Rom fans by declaring him as being dead in issue #25. And by the way thanks for not providing an explanation for Hybrid's return along with such predictable ending to him (back to Limbo how original!). Unfortunately I had already picked up 23 and 24 but at least I was able to save my money for 25. And please don't bother reminding me about the Rom licensing issue it's been all over the net for years now. Nothing a spelling tweak to the name and having him in human couldn't fix. Aside from Christos, Abnett & Lanning also have pretty much butchered the legacy of Bill Manlto's work. What a shame!


Update: This is a portion of the response I got later in the day from Rosemann. This pretty much confirms what we surmised why Marvel won't bring Rom back unfortunately. But I gotta hand it to him for bothering to get back to me after that rather scathing email of mine:

Remember, Giant-Man just said that the spaceknight in question was dead…but he can certainly be incorrect in his assumptions, yes? After all, he didn’t produce a body, did he?
And unfortunately, just changing a letter in a name or showing the character in his human guise wouldn’t satisfy those pesky lawyers. We wish it weren’t do, but thus is the litigious world we all live in.
So, just know that both Christos and DnA are huge fans of Bill Mantlo’s work, and this is all of our way of doing what we can to keep these great characters alive and introduced to a new generation of readers.
Posted by Shlomo Ben Hungstien at 12:03 AM 15 comments: 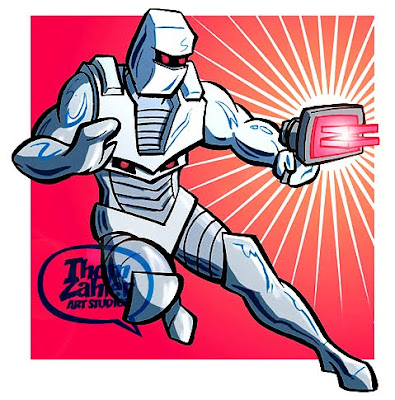 Usually I'm not a big fan of caricature style renderings of characters unless it's in MAD magazine or as a political cartoon but this one is an exception. This guy has a distinctive style that I like. It's kinda tongue n' cheek and bad ass looking at the same time. Not at all an easy thing to pull off. You may also recognize Zahler's work from IDW's Love & Capes title.

SAVE YOUR MONEY!
The first few pages of Avengers Academy #25 can be read here: http://www.theouthousers.com/forum/previews-f35/marvel-preview-avengers-academy-t76976.html
And for those of you who are interested in how the Avengers Academy Hybrid story arc ends you can see a comprehensive review of #25 here: http://xmanscomicblog.blogspot.com/2012/02/avengers-academy-25.html