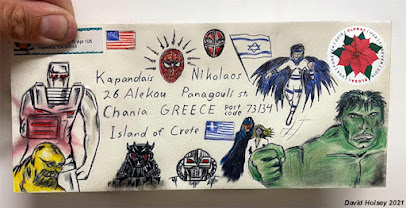 I was going to save all this stuff for a New Year's Day posting but screw it I just feeling like posting it tonight instead. For openers, this Bill Mantlo tribute fan art envelope is something I mailed off about 3 weeks ago (from California to Greece) but as of this blog posting it still hasn't arrived. The last time it took a whole month for one of my fan art envelopes to get to Greece but the one before that never arrived at all so who knows this time around? Good thing I always take a picture of these at the post office. 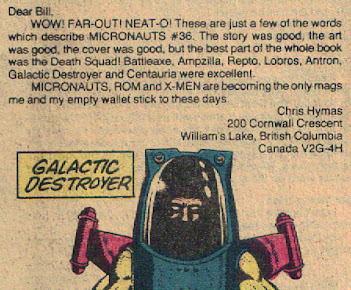 As in my last posting here's something else I've had for a while but never featured on this blog. It comes from The Micromails letter page of issue 40. It's a wonder ROM was not mentioned more then a couple times or so in the published fan letter pages of The Micronauts given that Bill Mantlo was the writer on both titles but we'll take what we can get. Look at that last sentence. Might as well have been another life time ago when you had a new issue of ROM, Micronauts (the real thing, not that fake shit from idw publishing) and The X-Men to look forward to every month. 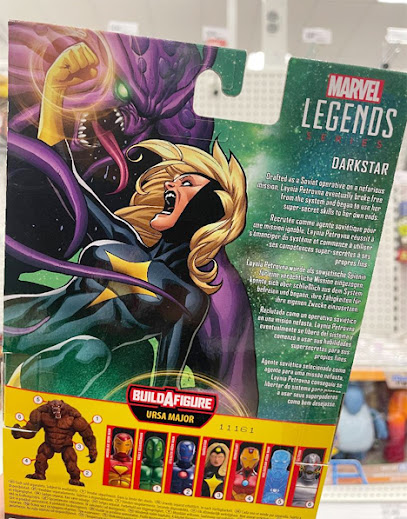 A while ago somebody mentioned something on social media about a dire wraith appearance on something having to do with Marvel Legends Darkstar. They didn't include a photo so I had no idea what they were talking about and I just dismissed it as internet noise. Bet then I saw this packaging art lifted from the cover art of Darkstar Winter Gaurd #3 at a big box store recently and it suddenly all made sense. That's pretty cool I'm fairly certain this is the first time the dire wraith have appeared on any published media outside of a comic book or magazine format. The Darkstar Winter Gaurd mini-series is just about the only decent thing Marvel has done when it comes to any ROM related continuity in the past 20 years. 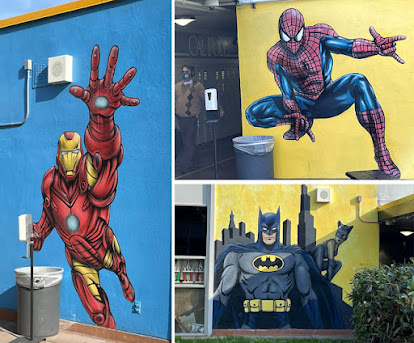 And I also have some newly discovered comic book/sci-fi related public art from The Bay Area to share. I found these murals at Ochoa Middle School in Hayward. How frigging cool that would have been to go to a school back in the day and have these to look at all the time.

Speaking of Iron Man, I was reading issue 164 online recently. This guy who is from what was then (1982) West Germany wrote a pretty long letter to the staff working on Iron Man at the time. As you can see he had no shortage of ideas and suggestions including a couple good ones when it came to all things ROM.

Posted by Shlomo Ben Hungstien at 1:56 AM