Dire Wraith / X-men cross over cover variants. Which do you like better folks? Plus, the "Why bring back ROM" slide show

You all remember the X-Men Classic series from the late 80s and 90s? It's where Marvel was reprinting a bunch of original X-men issues with different covers and they also featured an original back story. This series was a good marketing move on Marvel's part it had a lot to do with what got me into the X-Men. 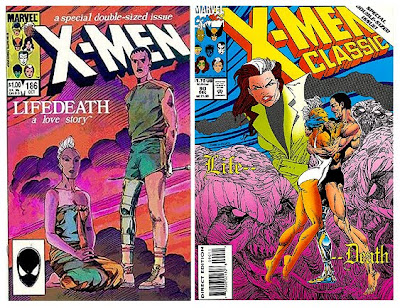 Well I came across X-Men Classic #91 (bottom clip art) in some $1 bins a couple of days ago. I have the original X-Men issue (#187) of course but I'd never seen the X-Men Classic variant version which prompted me to find the X-Men Classic cover for 90 which naturally reprints X-Men #186 which I also have. And in case you didn't know X-Men issues 185, 186,187 and 188 feature a Dire Wraith cross over storyline in which the Wraiths try to take down Forge because of the Neo-Neutrilazer he was developing to aid ROM in the Wraith War on Earth. For a recap go to: http://siskoid.blogspot.com/2009/07/so-whats-this-about-forges-dire-wraith.html
I thought it might be interesting to do a comparison of the covers and get some opinions on which you all like better. In the case X-Men 186 & X-Men Classic 90 I have to say I've always liked the original but the new one does add something extra to it that I like seeing as the story also featured a skirmish Rogue had with the Dire Wraiths. Even with the slightly exaggerated Billy Idol sneer on Rogue's face I'm kinda torn on this one. 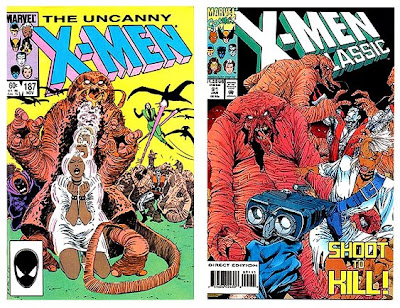 But in the case of X-Men 187 & X-Men Classic 91 it's a no brainer the original cover is far better. It's not that the X-men Classic cover is so terrible but to me what hurts it the most is how the lead Wraith looks. I just don't like the way it's drawn it kinda reminds me of a bad sci-fi B movie prop. And as you can see the original cover looks really good especially where composition is concerned. So what do you folks think? If your wondering why I didn't include X-Men issues 185 and 188 or their corresponding X-Men Classic issues in this posting is because neither versions of the covers feature any Wraiths.
Posted by Shlomo Ben Hungstien at 8:08 PM 5 comments:

2010 Winter Guard: A more comprehensive look at this mini-series and how the Dire Wraith fit into it

So part of my $1 bin score yesterday included #1 of the Winter Guard 3 issue mini-series. I had already done a posting about this series but it sucked cause it was just based on information I could find online. Pretty much all of which is not provided from ROM fans or those interested much in the Dire Wraiths. Well that's about to change. It all starts with the secret Wraith base in Russia that ROM, Starshine and the Soviet Super Soldiers went up against in ROM # 45 and 46: http://siskoid.blogspot.com/2009/03/spaceknight-saturdays-back-in-ussr.html Even though they killed all the Wraiths there the base remained intact which was later discovered and it along with it's technology was utilized by the Russian government. 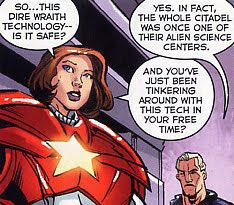 Now part of this story revolved around a character who used to be part of the various Soviet super hero teams but went M.I.A. at some point. Her name is Fantasma and has powers that are supernatural in nature. She's discovered during some kind of super natural weather disturbance and falls out of the sky complete with this hot purple Victory's Secret neglige. Unfortunately, it turns out she's a Dire Wraith who supposedly escaped Immortus's realm in Limbo (remember him from Annihilators #4?) after a year there and returned to Earth somehow. Which means of course this hot chick who wears an out fit that would even make Vampirella and Satana blush is actually butt ugly in her true form.

As if that doesn't suck enough by it's self she also has this plan of hatching all these Wraith egg spores hidden somewhere in The Citadel. How the Russians never discovered these eggs all these years is not explained. Maybe the place was understaffed due to budget cuts or something I don't know go figure. 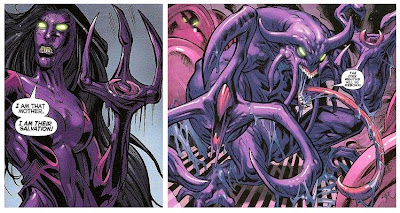 You see I told ya, butt ugly! Now of course you know a big show down is coming between the Winter Guard and Fantasma is coming but before that there is some preliminary battles including and "aerial rodeo show" Ursa Major has with some Deathwings. You can see that here: http://comicsvanguard.blogspot.com/2010/08/here-is-ursa-major.html But when the final show down does occur it involves a number of Wraith eggs that have hatched as well as the Winter Guard and another Russian super team called the Protectorate. During the 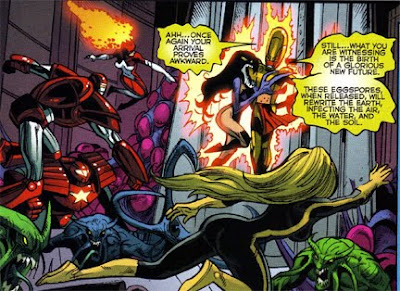 fever pitch of the battle the new Darkstar is tongue spiked by one of the Wraiths in the back of her head and it comes out of her mouth! Now apparently the new Darkstar has the powers and "spirit" of the original through some sort of gem she wears. When the Wraith takes on Darkstar's form which is typical after they suck out someone's brains something unexpected happens. The Darkstar force apparently possesses t

he Wraith and in the process some how the original Darkstar is reanimated. Now I don't pretend to understand 100% how that happened but I'm sure the last couple of paragraphs of the Darkstar history section on her Marvel wiki page can do a better job of it: http://marvel.wikia.com/Laynia_Petrovna_%28Earth-616%29 The reborn Darkstar eradicates the Wraith hatchlings and rallies her comrades to defeat Fantasma by some how sending her back to Limbo. And in just like a Michael Bay film all our heroes make good their escape as the Citadel blows up into smitherenes. So that's it based on my reading of the first issue and what I could research about issue's 2 and 3 which hopefully I'll find some day in another back issue bin. Some of the stuff I've read on blogs about this series kinda criticized the writers for making Fantasma a Wraith and reviving what they considered an irrelevant 80's franchise. This ROM centric summery of the Darkstar Winter Guard mini- series is my way of saying fuck em!

August 26 Update: I just found Darkstar Winter Guard # 2 and 3 yesterday. It looks like my summery of the mini-series was pretty accurate as it turns out. But what's also worth mentioning is that there is also some discussion about the Dire Wraiths that are in Limbo trying to invade the realm of Immortus. This ties-in to Annihilators #4 in which the team brings Volx to Limbo and have a run in with Immortus who as it turns out has the dominion over the Wraiths there. It also turns out that Fantasma is an escaped Wraith from Limbo.
Posted by Shlomo Ben Hungstien at 3:38 PM 4 comments: