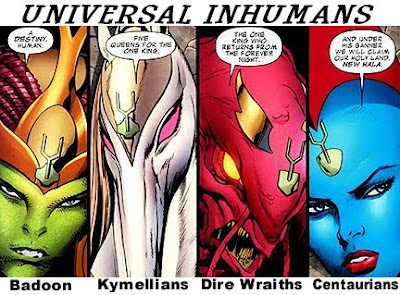 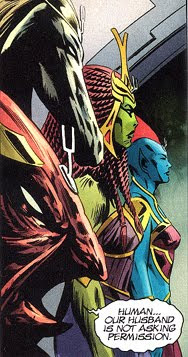 other 4 species who are now known as the Universal Inhumans. Their prophecy involves his return and to make all 5 former Kree experimented species one big happy family through a "Big Love" type marriage in which Black Bolt would take an Inhuman wife and one from each of the Universal Inhumans species. This would be a good time to take special note of the dialogue in the clip art. As you can see from the FF #9 (Future Foundations) clip art to the left from September it looks like they all tied the knot already. I wonder how that honey moon went? I'm a bit on the kinky side so I probably could have hooked up with the centurion chick and with his Inhuman wife Medusa. But as far as the other three go forget it not even after a 6 pack!
Posted by Shlomo Ben Hungstien at 10:40 PM