I think 288 (1983) was the first Incredible Hulk issue I ever had. My mother grabbed something for me from a gift shop to help pass the time at an airport. So when I saw it at my local comic shop a couple of days ago for a few bucks I bought it in order share some of the best panels in it. I remember being blown away by the art work it was so dynamic you could practically feel and hear the action in it. That kind of drawing style is a good example of what's known as "the Marvel way". Little did I know at the time that it was written and drawn by the same two guys who were working on ROM which I already had had a few issues of. 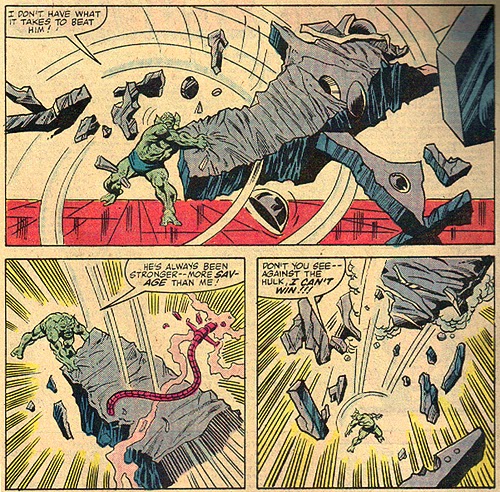 Now it so happens that Incredible Hulk 288 had a Bullpen Bulletin page which included a Mighty Marvel Checklist that had Rom #47 listed among the other titles out that month. That's ironic given that I had mentioned #47 in the previous posting in reference to Shang Chi The Master of Kung Fu.

So that tells us at least some of what else Sal Buscema (and Mantlo of course) was working on at the time. But unlike The Hulk title Sal's penciling was complimented by the beautiful inks of the dynamic inking duo Akin & Garvey. Look at that line work in those Rom 47 panels, it's like the brush strokes of a master piece panting. That Mighty Marvel Checklist also included a small feature about the debut of the Cloak & Dagger mini-series so we see that Bill Mantlo had plenty of work on his hands at the time as well.

Posted by Shlomo Ben Hungstien at 8:50 AM