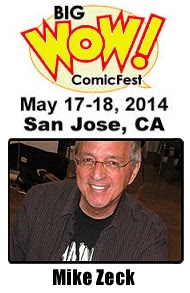 On the Marvel end of this weekend's con in San Jose I'm hoping to get a chance to have a few words with Mike Zeck. I've often cited Zeck as being one of the best comic book artists ever seen and certainly among the very best of the Marvel 80s. His body of work among other great stuff included some awesome penciling at the tale on of the 70s on Shang Chi Master of Kung Fu and later with The Punisher, Web of Spiderman and of course Secret Wars. And who can forget that iconic Captain America annual cover by Zeck with Wolverine slashing at Cap's shield with all those sparks n shit!?
There's at least 3 issues of ROM that Zeck did the cover art for so I'm pretty grateful for that even though I would have loved to have seen him having done at least one issue in the series as far as the interior art goes. Needles to say when you think about Secret Wars you can just imagine how awesome Rom#65 could have been had Zeck been the penciler instead of  . . well you know who.


Like last year Michael Golden will be there again and as you all know he was another powerhouse Marvel 80s artist who did the cover art for at least 9 Rom issues I believe but never the interior art unfortunately. Didn't get a chance to talk to him he got irritated with me when I pointed my camera in his direction he doesn't like that unless you specifically ask him first. But for me the high light of last year's Big Wow Con was meeting Bill Sienkiewicz who also did the cover art for at least 9 issues and even some interior fill in pencils for a couple of them
http://romspaceknightart.blogspot.com/2013/05/big-wow-comic-con-san-jose-ca-2013.html 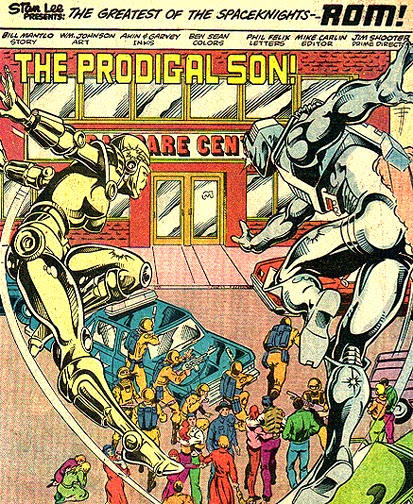 Speaking of those Rom covers that Sienkiewicz did, one of them was Rom annual 3 but the pencils were done by someone named WM Johnson. Who is this guy!? His work on that issue was fantastic but I've never heard of him before and internet searches haven't given me squat. Talk about another artist who could have done justice to the series had he stepped in for Sal.