Screw basketball this is Man-Thing Madness 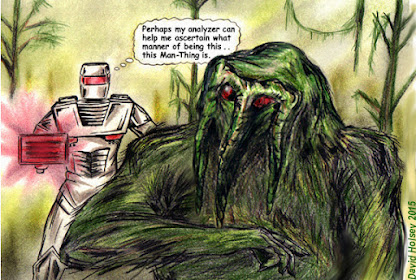 Well I've got this temporary lull in my schedule and I decided to enjoy some of my down time with one of my favorite leisure activities which is to draw. I had this story idea for a while now in which The Dire Wraiths possess The Man-Thing in order to create some sort of mayhem in the their latest scheme against humanity. Discovering their, plot ROM shows up to save the day by breaking their spell which in turn have the dire wraiths running scared because now they've not only lost control of the Man-Thing but also have their greatest enemy on the scene. But it isn't ROM that does them in because as you all should know Whatever knows fear burns at the touch of The Man-Thing!
On a side note here if you want to read a some what cheesy but entertaining Man-Thing related story from the bronze age of comics written by Bill Mantlo I recommend Marvel Premier 28
http://bronzeagebabies.blogspot.com/2011/10/legion-of-mediocrity-marvel-premiere-28.html
That's gonna pretty much do it for March it's been another much to do about nothing month in regards to all things ROM related as far as any news or any cool fan art and what not. It's not to say no new fan art has appeared this month but it just hasn't been the sort of thing I want to post on this blog any more. Some new fan art has turned up this month but of that new art work here's the most recent piece which happens to be by someone who's got some serious illustration skills but unfortunately didn't put much imagination into their ROM fan art  . . .
http://iszyiszard.deviantart.com/art/Romspaceknight-522296953

Posted by Shlomo Ben Hungstien at 11:52 AM