The only thing missing from the ROM 2016 zero issue cover 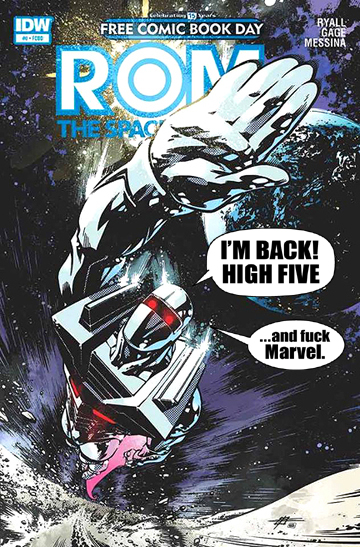 There are so many different things that would have been great to insert into those dialogue bubbles it almost boggles the human mind (examples: Always bet on silver! Wassup bitches!? or just simply wwwassssssup! and so on). Big thanks to Gary Martin Jr. for bringing to my attention a very cool article (Dec.10) by Trent Hunsaker about what will hopefully be a triumphant return for ROM next year. And I'm not just saying that because Trent made it clear in his article that he's something of a fan of this blog (which makes you a ROM fan who's most certainly not a dick) but he does offer some insight as to what we might expect and reasons to be optimistic about the new series. I would especially recommend this article for those of you who are feeling a little more on the pessimistic side about ROM's non marvel return.
I just want to correct you on a couple little things Trent the IDW announcement for the new series (along with a new Micronauts series) came out back in July. And also, thus far "Venom spaceknight" has shown no indication of having any sort of ROM related continuity to it. The expression "what's in a name" totally applies here the spaceknight title seems to pertain to venom as a cosmic adventurer as opposed to Galadorian spaceknights. So now that we got all that out of the way let's get to the article . . .
http://www.bigshinyrobot.com/59400/rom-returns/

Also, this is why I love people who leave comments on this blog like nikoskap in the previous posting. The cover artist has this art work (uncolored) on deviant art and he actually responds to comments so here's your chance to let him know what you think about it  . . .
http://spacefriend-krunk.deviantart.com/art/Rom-0-Cover-for-FCBD-577222062

Dec. 13th Update: Look what Gary found just in time for me to post while Hanukkah is still going on. How many of you out there remember that mid to late 80s TV show Small Wonder about the android girl care taker known as V.I.C.I?