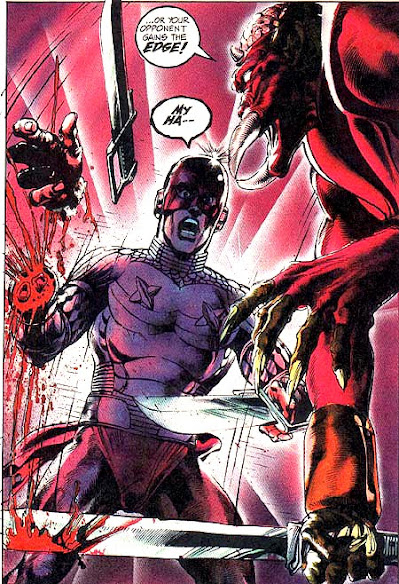 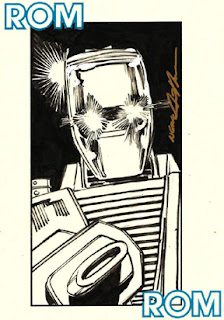 With William Hurt's reoccurring role as General "Thunderbolt" Ross, this is now the second time this year someone who made their mark on the comic book genre industry has passed away. In honor of Neal Adams legacy in all aspects (as an artist and advocate for artist rights) of the comic book industry I'm posting this mind blowing splash page of Armor 2 from Continuity Comics that Adams penciled. This scene definitely gives new meaning to the splash in splash page. His art work is really timeless. You could take anything he did like on Batman or in The X-Men of the late 70s and it'll hold up to anything in contemporary comic book art. Unlike Ditko, Adams would have made a great replacement for Sal Buscema on the ROM Spaceknight series. On an interesting side note I just learned that Neal Adams was Jewish although as far as I can tell Adams is the family name he was born with.

And speaking of all things ROM, here's the latest envelope fan art for my friend and artistic collaborator in Greece. Turns out aside from our mutual love of science fiction and comics we're also on the same page politically on most things so bonus points to the 4 or 5 people who will see this posting and get the significance of ROM and company attacking the military forces that this tank belongs to. 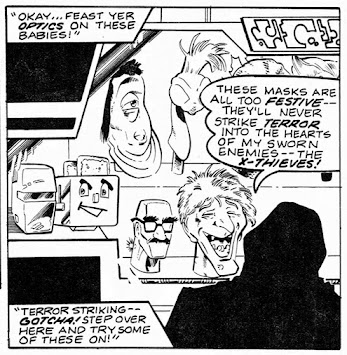 It's been quite a while since I've had something to post outside of fan art so today is a pleasant change of pace. This is no doubt one of the most obscure ROM Easter eggs I've ever come across. This panel is from issue 11 of the mid to late 80s comic book series X-Thieves published by COMICS Interview Publications. From what I've seen of it online it's a rather quirky and all around bizarre story line that probably is best enjoyed if the reader doesn't expend too much time and energy trying to make sense of it. I don't think it's any coincidence that right next to the ROM mask is another one of a toaster oven. 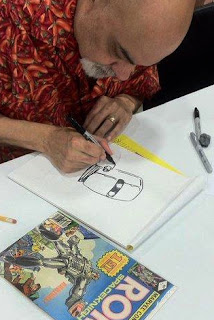 May 7th Update: It's down right creepy how the death of yet another legendary artist from the comic book industry (George Perez ofcourse) should not only happen basically a week after Neal Adams passing but also on this year's Free Comic Book Day. As an artist, pretty much all the words of praise I gave to Adams also applies to Perez. His work was timeless in it's quality and appeal. Rest In Peace George. 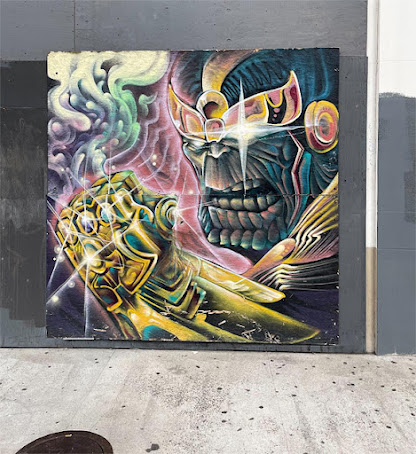 June 5th Update: I just got back from a weekend in Sacramento California and I saw this Thanos mural in the downtown area so I was like...."yeah I need to do one more update to this posting". It's a real pleasure to post some little known sci-fi or comic book based public art once in a while. I have no idea who did this all I can tell you is that upon a closer look I could see this was painted on two separate horizontal pieces of plywood like boards.