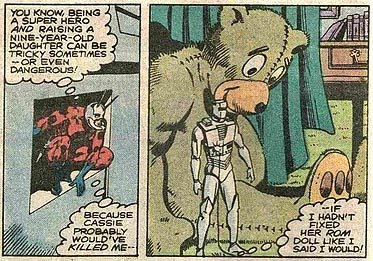 I just stumbled across this two panel image of something I had never seen before. What we seem to have here is ROM appearing in the Marvel Universe as the Parker Bros. doll instead of as a interactive character. As we all know Ant-Man and ROM have appeared together before but not quite like this. At least now for all of you collectors out there who still have the doll now know who to go to if it gets busted. But were not talking about Henry Pym here. Apparently this was an ex-con named Scott Lang who had a daughter and was Ant-Man for a while. I think it would have been an extra added nice touch to make the anatomy of the figure in the drawing look like the Parker Bros. one for authenticities sake.
January 2013 update:  http://www.supermegamonkey.net/chronocomic/entries/marvel_team-up_103.shtml
Also, the full issue can be read here: http://mailittoteamup.blogspot.com/2012/08/marvel-team-up-fro-to-z-marvel-team-up.html
Posted by Shlomo Ben Hungstien at 2:20 PM