Any body remember the Watch-wraiths? They were these constructs that the science Wraiths developed as sentinels and body guards. We only get to see them 3 times through out the ROM series but I always liked em and wished we could have seen them more. Especially if they maybe had shown them in flash back sequences during the Galador-Wraith war fighting other Spaceknights.
Now over to Transformers II which was the 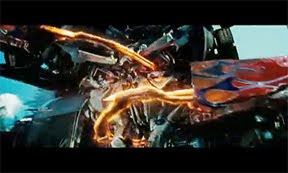 return of Michael Bay to his usual over the top pander to pop culture shitty movie making style. But even this peice of shit did have it's moments like the forest fight scene in which Optimus takes on almost all the Decepticons on his own cause he's bad ass that way when he has to be. Even though he's too modest to admit it, which is really what makes Optimus Prime so awesome more so even then him being a great warrior! Besides, as Yoda said in ESB, "Wars not make one great" and I'm sure Prime would agree. There's this one point where Optimus climbs on the back of a Decepticon that's bigger then him and gets his "meat hooks" into the Decepticon and literally rips his fucken face apart! It was a great scene in the midst of a sequel that was so very inferior to the first TF movie. Here it is to the sound effects of the epic kick ass film 300.
http://www.youtube.com/watch?v=ak_SvePnFXM 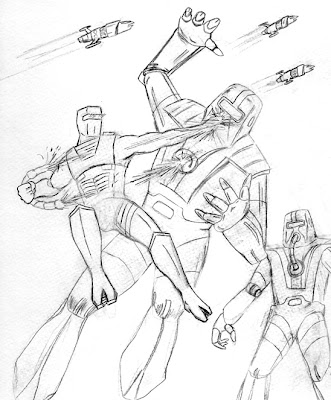 So anyways that's where I got the inspiration and idea for this sketch which I'll hopefully have colored by the end of Friday or Saturday. The dude at Floating World Comics wants this by Sunday for the Bill Mantlo art auction but I'm hoping he just wants to see something having been done and not the actual work in his hands. Shit I just found out about this on Tuesday afternoon and it's Thanksgiving today. Stay tuned folks I'll have the finished work posted as soon as it's . . finished. Sketching stuff always takes me longer then to color it so who knows I might have this done by tomorrow night. All I got going on tomorrow is I'm heading to S.F. in the morning with some friends to cause some trouble with the lunatic left wing fringe. They're going to be staging another pro-terror demonstration in the middle of the busiest shopping square in S.F on Black Friday.
Posted by Shlomo Ben Hungstien at 5:34 PM