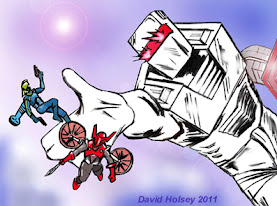 I wonder why Bill Mantlo never had a cross over between these two titles. Both of which were inspired by toys that stirred Mantlo's fertile imagination. Each title has crossed over with numerous mainstream Marvel characters and teams through out the 80's. An early issue of The Micronauts even had the Man-Thing make an appearance as a nemesis. That always struck me as an odd cross over. I just think some sort of adventure that had brought ROM and The Micronauts together would have been cool at some point. Written by Bill Mantlo with art by none other then Mike Golden. What a classic that would have been! Not to take anything away from Sal Buscema cause you all know how much I love Sal's work. But having ROM featured in an issue that Mike Golden penciled would have been a nice change up. Golden was the regular cover and interior artist for Micronauts 1 - 12 and continued as the cover artist for the next dozen issues or so. He was also the cover artist for 9 of the first 19 issues of ROM. The ironic thing is that I loved The Micronauts toy line and thought the comic book wasn't bad for the most part. Where as I was/am a huge fan of ROM the comic book (obviously!) but outside of the electronics not really all that into the doll. Where as the Micronauts were shiny, articulate, detailed and even had interchangeable 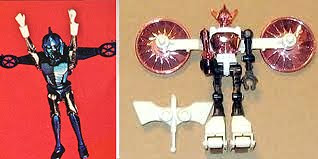 parts where as the ROM doll had none of these features. But I can certainly understand how in each case a guy like Mantlo would have looked at these toys and started to see personalities, a background story and adventure. I've been wanting to blog about this for a long time now but never felt like I had the ideal visuals to go with it until I came up with a sketch a few days ago which I digitally colored. Although not inspired by a toy line, Bill Mantlo was also the creator of the Marvel superhero duo Cloak & Dagger.
Posted by Shlomo Ben Hungstien at 10:30 PM