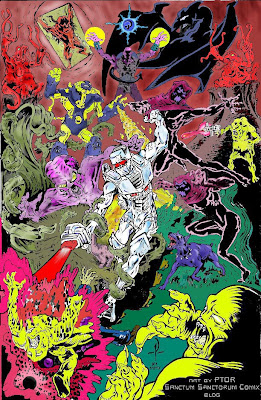 So I just want to start off by saying that this is a sketch that was done by ~P~ from the Sanctum Sanctorum for this year's Bill Mantlo art auction that I just merely colored in photoshop. Why? Because like many of you I wanted to see what it would look like in color and I'm just not the most patient person in the world as many who know me will tell you. ~P~ has a very demanding job in an industry that I'm all too familiar with, he and his wife run and animal shelter, he's writing a script for Marvel Studios for a feature film starring Dr. Strange, ROM and The Man-Thing all together plus he'll be running for office in 2012. With all this I just don't think he'll get around to coloring his sketch in an acceptable amount of time for me. Of all the things going on in this sketch the hardest character to color was ROM himself. As the center piece of a fairly busy drawing you want to make sure ROM isn't overwhelmed by the other elements around him which are actually more colorful then he is. Silver is not really a color after all. We take it for granted but it's quite clever how the colorists over the years have used bold black line work and heavy shading along with some strategically place touches of blue tones to create that silver looking spaceknight armor that is ROM. So he's not really silver at all, he just appears to be. Admittedly I did take one artistic liberty aside from the color. I removed the boobs on the female Dire -Wraiths. As a big big fan of human female mammary glands the thought of the Wraith women having anything along those lines was just too disturbing for me. ~P~, I hope this doesn't piss you off that I did this and posted it you know of course your welcomed to a file of the colored sketch. And Dan, I know your looking at this I believe you owe my something along the lines of some ROM related art? To see the uncolored sketch go to
http://sanctumsanctorumcomix.blogspot.com/2010/12/rom-spaceknight-illustration-final.html
Posted by Shlomo Ben Hungstien at 12:10 AM