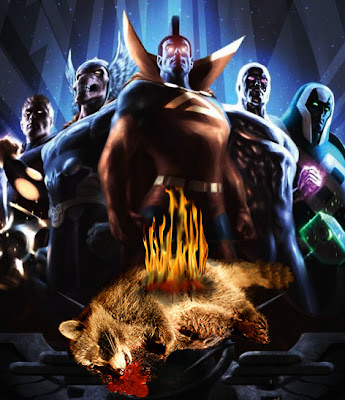 WARNING! I'm about to put Christian Bale's rant on the set of Terminator 4 to shame.

What the fuck is wrong with every body as of A#2!? All I'm seeing all over the internet is all this bitching and moaning about every little thing about the Annihilator's story while at the same time there's all these circle jerks going around about Rocket Raccoon. RR is about as cool when it comes to Marvel Cosmic stories as Howard the fucken Duck is! As if the idea of a sentient raccoon being part of the mainstream Marvel Universe isn't pretty I'll conceived in the first place.
So we've seen him so far in this "Office Space" kinda rip off as a mail clerk and in this latest issue he's fighting along side with gun totting mushrooms and squirrels against killer clowns from outer space. And since the squirrel had to go ahead and use a line from the first Batman film (as in Tim Burton not Chris Nolan) it's a wonder there wasn't a mention about TPS reports in the first RR story. Oh yeah, and then of course there's the cyborg pigeons. I haven't seen anything so fucken retarded since the Batman movie that had the Penguin. Remember that army of cyborg penguins? Look, some 40 year old virgin out there actually tattooed that to his fucken arm. Who wants to bet me that dude is probably a Rocket Raccoon fan too? To illustrate what I'm talking about here is a portion of a review that makes me absolutely nauseous, the bold face stuff especially:

That's why it's so heartening to have Rocket Raccoon and Groot acting as backup. All the humor and zany energy missing from the first feature seems to have drained into the second. This segment is frequently hilarious, but also touching as the two friends reunite. And you haven't quite lived until you've seen a militant mushroom and a bazooka-toting squirrel spit action movie one-liners. Humor, heart, and balls-to-the-wall action. This is what I expect from my Cosmic Marvel stories.

I don't know weather I should get this guy a box of kleenex or a tampon. What the fuck is this? Broke Back Planet or something? It gives a whole knew meaning to the term back story. We'll let me tell ya, my back side hurts every time I have to drop $5 for 20 pages of an actual Cosmic Marvel story knowing that a large portion of that cover price is for stupid shit that makes retards like the guy who wrote that review happy.
Rocket Raccoon is lame and was a concept that was only fitting for something like Star Comics of the 1980s that featured titles like Heathcliffe, Ewoks, Planet Terry and the fucken Carebears! So for all you panzie asses that are practically having an orgasm over the RR back story I hope the next time you take out your garbage you find a raccoon waiting for you by the trash. They're not cute little cosmic super heroes, those fuckers are mean!
Posted by Shlomo Ben Hungstien at 12:00 PM