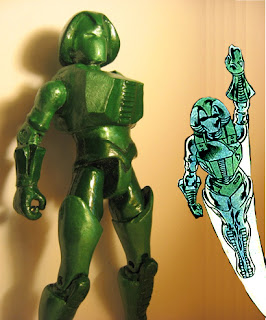 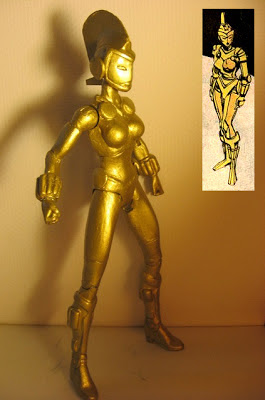 Remember how in the previous posting I was talking about how I rarely come across Rom related fan art that I all around really like and how most of what I see is often mediocre or a mixed bag? Now take a close look at this one. In particular how this scene is composed and how Rom is drawn. . . . . yeah you can tell this guy has some skills. But I don't if this guy just got lazy at a certain point in this illustration or if that's his genuine interpretation of the Hybrid character but the way his face is drawn just does not work in what is otherwise a well done drawing. It looks way too caricaturist almost like something you'd expect Fred Hembeck to draw. No offense to Hembeck, it's just not the drawing style I want to see here.
It's a pity this fan art was very close to being an all around great illustration like the Dann Phillips art work in the previous posting. And speaking of which there have been some recent new Rom fan art uncovered recently. Rather it's good or not I'll let you all decide for yourselves:
http://browse.deviantart.com/art/Spaceknight-Cometh-379360677
http://browse.deviantart.com/art/ROM-Commission-382118842
One last thing here, just to put into perspective what a good deal that Rom original by Dann Phillips was on ebay you'll pay $75 if you wan this one: http://www.ebay.com/itm/ORIGINAL-ART-AVENGERS-SKETCH-COVER-ROM-SPACEKNIGHT-BY-VAN-SCIVER-/330946867699
Posted by Shlomo Ben Hungstien at 9:07 AM