Step into the NOVA Year with some SABRA 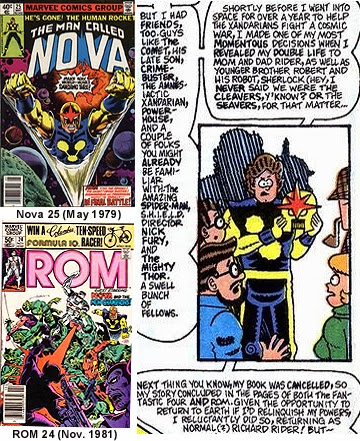 I'm going to open up the New Year with something of a recap. I get the distinct impression that no one bothered to check out the Marvel Age 89 link to the Fred Hembeck two page spread for the Nova chronology a couple postings ago. That's a shame because when I read it I discovered some interesting things I probably should have known already.
Did you know that the original Nova series only lasted for 25 issues? Hard to believe considering the character's popularity today. It also puts things in perspective with Rom who's series lasted for 75 issues. The story line in Nova 25 (damn! I used to have that issue) didn't end with that issue but was actually continued in the pages of The Fantastic 4 and about a year and half later Richard Rider's adventures as Nova would come to an end (for the time being) in Rom 24 as you all know.

Hat tip to Rick Hansen for sharing this with me. At first I wondered if this was some kind of photoshop none sense but after taking a closer look I'm more inclined to believe this is legit. No other information on this unfortunately.

Here we have Sabra rockin the Jew fro look. Along with Misty Knight, Sabra is the only other heroine in the Marvel Universe who can make that style look good. The posting I found this cool fan art at was a fun read. The artist isn't that familiar with the Sabra character apparently but was never the less inspired to draw her anyways because of all the Bill Mantlo related stuff I'm always posting on this blog. What you see here is probably the easiest digital coloring job I've ever done but of course you can see the original line art at the posting link below. It's a good example of the sort of art work that's easy to color unlike that Torpedo piece I did a few postings ago
http://kimoyancey.blogspot.com/search?q=rom+

Behold, The King of Thessaly (K.o.T) has returned. On your knees dog!