ROM and Dr Doom face off in Strange magazine 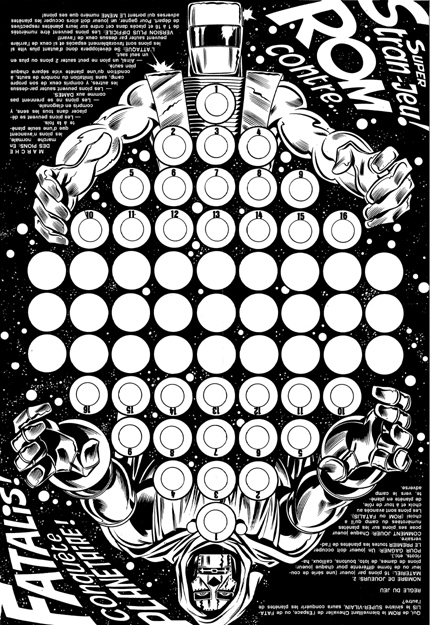 Ok enough of all this IDW shit for a while it's time to get back to some old school stuff again. This comes to us from Gary Martin Jr. proving once again he is a ROM curator through and through. I'm actually a bit sketchy on the details here but I believe this comes from the activity section or page of the Marvel mostly reprint French magazine STRANGE issue 166. Interestingly enough notice how the rendering of ROM here has him with fingers instead of mittens? This will most likely be my last posting of the month but as I've mentioned to some of you I have another posting idea for early next month that involves some exotic locations on the other side of the world I'll at starting late next week.

One other thing. I wanted to thank EVERYONE who's come to visit this blog recently especially if you left a comment. It's been a LOT of fun for the past couple weeks with all the back and forth here with those who share the same opinions or have a different point of view rather it be about the zero issue or Civil War and whatever. I know some folks over the years have had issues with everything from my sarcasm, cynicism and even the very blog title it's self. But if nothing else I keep it pretty interesting here much of what I post you won't find on other blogs, twitter or farcebook with ROM fan boys. That was my primary mission when I started this blog actually. But even more importantly you will not be ignored here or have your comments go unanswered. I've just always thought that's a dick move.

Posted by Shlomo Ben Hungstien at 2:41 AM