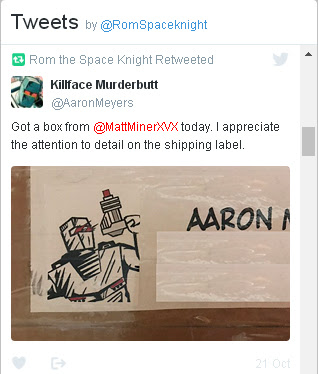 Here's a screen shot of something I saw on Twitter earlier this evening but this isn't the first time I've seen some of my ROM fan art turn up else where. On one hand when this happens I'm a bit flattered but also kind of annoyed because it seems like it's never by anyone I know or have other wise had any communication with as far as I as I can tell. It would be nice for a change if someone actually said something about the art work they're about to lift off of my site much less ask permission to use it just as a matter of courtesy. And then on top of that they never mention where they got the art work from that they see fit to use. I think there's something to be said for a some kind of basic internet etiquette. This sure ain't the 80s any more.


October 22 Update: Well with Gary's diorama in the previous posting it seems fitting to introduce this other unique sort of arts n' craft type tribute art work. This is something I found some time last year but have been sitting on for a while now for what ever reason I don't recall now. I think this is what you would call a shadow box and it was posted by a fellow by the name of Angel Velasquez who I assume is the artist. This is pretty cool it would make for a nice display piece in the home of any ROM fan. 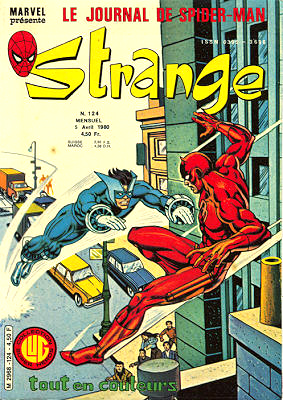 I did away with the previous art work I had here because what I coincidentally found this morning was way cooler. Check out how the cover art for Daredevil 126 is similar and yet different at the same time with this Strange cover you see above you ....
http://marvel.wikia.com/wiki/Daredevil_Vol_1_126