The most under rated Marvel artist Ron Frenz

Let me just talk a little bit about THOR 383 first because it's really an excellent tie-in to the original Secret Wars 12 issue series. In the Secret Wars story line at one point The Enchantress temporarily magically transports herself and THOR off The Beyonder's Battleworld only to return there right in the middle of Dr. Doom's army of super villains. Not only in THOR 383 do we find out where they went for a while but we also get to see a recap of the entire fight between THOR and Doom's forces played out (as seen in Secret Wars 4) with new art work by Ron Frenz. 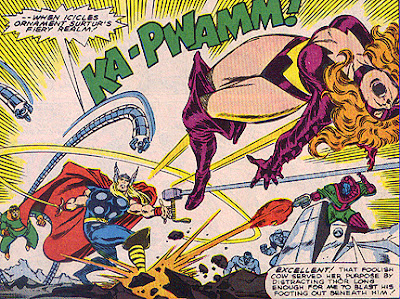 As you can see the art work kicks ass I mean seriously this is Sal Buscema level quality and that's pretty high praise coming from me as you all know. This is exactly what is meant when you hear about comic book art being done "The Marvel Way". It's very strange how Frenz doesn't have more notoriety in the industry like I said a really under rated artist.

It's rather sad that many of the same people who would practically drop to their knees upon hearing the name of a certain other artist who's work was out dated and woefully inadequate back in the 80s would probably be all but clueless about Ron Frenz and his fantastic work. That's just wrong.

Posted by Shlomo Ben Hungstien at 8:00 AM