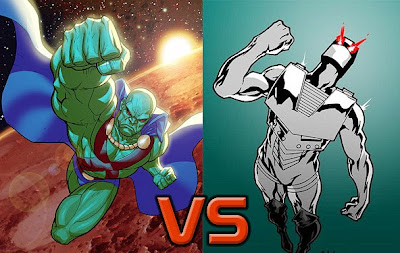 I just found this blog site of these DC vs Marvel match ups in which there is the most unlikely of showdowns. One of my favorite DC characters versus the guy this blog site is about. If there was ever two dudes who could respectfully negotiate their way out of having to throw down it's these two but hey, this is all purely hypothetical. The site apparently doesn't actually describe the battles but just sets it up and lets the commentators throw they're opinions into the ring.
On paper MM is the more powerful of the two no doubt. But I wouldn't be too quick to write off The Greatest of the Spaceknights. After all he was able to hold his own against Gladiator (Shiar Imperial Guard) in ROM annual #4. Plus, ROM's neutralizer could be an ace up his sleeve. It would be curious to see how that would affect MM. Plus, what if a fire broke out over the course of the fight? I'm sure you have some ideas of your own but have a look at what others were saying at the time: http://www.theouthousers.com/forum/the-news-stand/arena-martian-manhunter-rom-match-over-t57093.html
Feature art work by Eddie Nunez (MM) and Mahmud Asrar (ROM) www.mahmudasrar.com
Posted by Shlomo Ben Hungstien at 6:39 PM