Cosmo & the sentient animals of the Marvel Universe debate 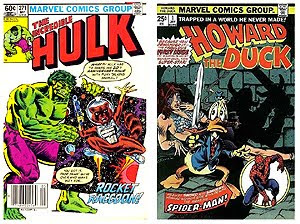 Often in the world of comics it's not always easy to understand why we find some concepts and characters appealing and why we don't care for others. Some of the last comments made in the previous posting has prompted me to address this. I had never even heard of the Cosmo character until the Thanos Devastation one shot that kicked of the Annihilators mini-series. But I liked him right away. Where as characters like Rocket Raccoon and Howard the Duck who I've been aware of since the early 80s have been of no interest to me.
First of all we have to just simply accept the whole sentient animal concept in the first place. So what's the difference between Cosmo and the ones I don't like? Well both Howard and RR are drawn to look like "cartoonish" caricatures of the animals they are. So it's kinda like seeing something that looks like Rocky the flying squirrel interacting with characters like Ikon, Gladiator or the Silver Surfer. That right there makes it hard for me 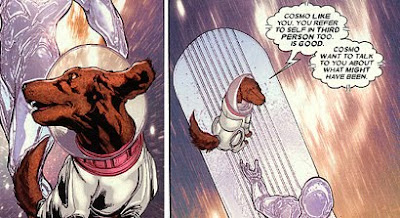 to take those characters seriously in the main stream Marvel Universe. Cosmo is drawn to look like a real dog. Plus, both Howard and RR have these kinda wise guy personalities. Their intended appeal to the readers feels a little forced and contrived to me. Where as Cosmo despite his powers and intelligence has almost this sense of innocence about him and simplistic way of looking at situations that sort of befits the concept of a common dog turned sentient. I think a great example of that is the clip art provide above. He's funny with out trying to be. So that's just my honest non-ranting take on things when it comes to sentient animals of the Marvel Universe. I'm not going to get into Cosmo's origins I'll leave that up to you folks to find out using Google or whatever other search engines you prefer.

By the way, you may have heard Cosmo at one time or another cry out "BOZHE MOI!". If that sounds familiar to you it's because we've heard it a lot with Colossus of the X-Men and maybe on occasions with other Russian characters in Marvel, usually said when someone is amazed or startled. It translates literally into "my God". Speaking for myself during moments of amazement or shock I usually say holy shit. I guess that's kinda similar.
Posted by Shlomo Ben Hungstien at 2:16 PM