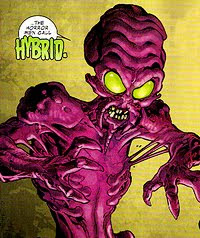 Martin from the Too Dangerous For A Girl blog http://dangermart.blogspot.com/ gave me a heads up earlier today about Avengers Academy #23 having something I would find of interest. Thanks for the heads up on this mate!
So basically some members of the Avengers go out on a call to save an orphan mutant boy (Jimmy Marks) by some anti-mutant religious fanatics called the Purifiers. Jimmy is adamant about not being sent to the X-Men so the Avengers allow him to stay at Avengers Academy. Toward the end of the issue Jimmy reveals himself to be Hybrid to Reptil sensing that Reptil knows the truth about him. It also turns out that Hybrid knows that the psyche of Reptil's future self is inhabiting the body of the current much younger Reptil and that Reptil facilitated Hybrid's return (we don't know how exactly yet) for his own agenda. Hybird agrees to cooperate with Reptil (for now) under the promise of getting dominion over some of the Avenger cadets. Avenger Academy #24 will continue the Hybrid story line.
The last time we saw hybrid in the Marvel Universe (1997) was back when he battled X-Man (Nate Grey) and was psi-blasted into atoms. For a recap of the issue: http://romspaceknightart.blogspot.com/2010/11/finally-x-man-32-extended-review-return.html
Posted by Shlomo Ben Hungstien at 7:33 PM