ROM, Herald of Galactus by Scott Reed. Plus, Micronauts #8 just imagine if. . . 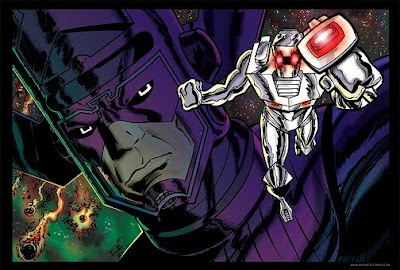 According to Reed this is a combination of digital and traditional tools. Penciled in Illustrator, and inked with a Windsor-Newton series 7 brush. This is now the fourth ROM/Galactus themed fan art I've now come across in the last year or so. I think it's really cool how ROM # 26 & 27 have still managed to stay in people's imaginations all these years. But I still wonder why nobody thus far has done a ROM/Silver Surfer piece? 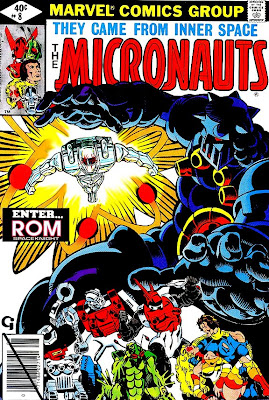 Oh I was just messing around with photoshop and this Micronauts cover art and wondered what it would look like if I replaced Captain Universe with a certain silver spaceknight. The nice thing is when you know how to use photoshop you don't have to wonder you can just make it happen visually speaking. This sort of ROM "saves the day" scenario that sets up a confrontation between the tyrant of the Microverse and the Greatest of the Spaceknights would have been epic indeed!

First thing next week we take a look at a recently found 1981 interview with Bill Mantlo
Posted by Shlomo Ben Hungstien at 12:03 AM