The challenges of digital coloring 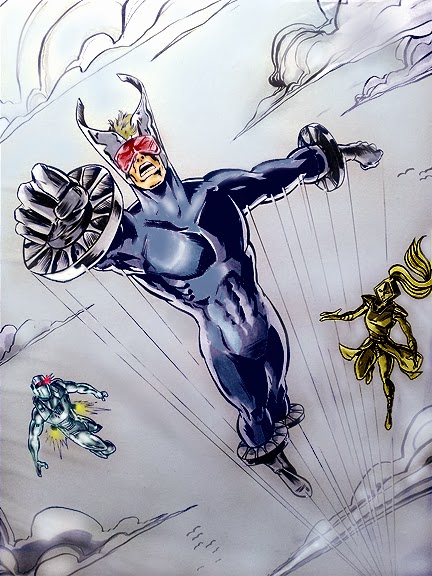 Here's some of the latest fan art by Dann Phillips that recently showed up on deviant art. I usually only like to color art work that primarily consists of bold and fine line work on a white back ground. Fan art that consists of heavy shading in multiple darkness to lightness values represent a lot of coloring challenges that can make what normally would take me well under an hour to taking me half the day to do.
But on a whim in between breakfast, listening to the news and working out I tried something new out on this piece. Of course I used photoshop to do this in so I'll put it in Laymens terms. Basically, it deals with making multiple copies of the entire art piece and assigning an individual color swatch to each one. Then you just lay them all on top of each other and remove what you don't want from each one until the full picture appears. And then there was a little touch up work done using the more common photoshop features like the air brush and color fill tools.
I may end up tweaking it some more over the next couple of days but for now I'll post how it came out initially.You may notice that the this new coloring method doesn't produce the more vibrant colors as seen with the type of fan art I more typically color. The U-Foes coloring job from a few postings back is a good example that. Never the less it's always good to expand your horizons a bit from time to time. 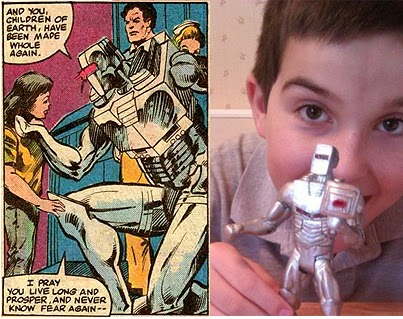 When it comes to the well fare of your children trust no one other the greatest of the spaceknights to get the job done.

Just a little something for shits n giggles I whipped up in photoshop and decided to throw in here as an after thought. I'm sure the inspiration for this is pretty obvious.

Posted by Shlomo Ben Hungstien at 11:37 AM