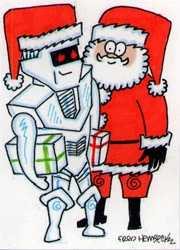 I found this sketch card earlier this month on ebay and thought I'd save it for the right time to post. As I said before I've never been a big Hembeck fan but I've been kinda digin these Rom sketch cards by him that have been turning up lately. Also, gotta give it up to Hembeck for Marvel Age #89 (1990) and his NOVA chronology two page spread. In the last panel there is a direct reference made to ROM #24. Ya know something is missing in a a Nova origin story if it doesn't cover the events of that issue http://marvel1980s.blogspot.com/2013/12/1990-kid-called-nova-by-fred-hembeck.html

And moving on it's time to spread some holiday cheer with some stuff from Gary Martin Jr. that I've had for a little while. This is the first appearance of the Dire Wraith Queen Volx (Nova 17 vol. 2). Nova 17 and 18 chronicles how she managed to get to Earth as a stowaway on a Xandarian transport ship that has Richard Rider on it. After taking on the identity of one of it's pilots she is never the less discovered and the ensuing battle causes the ship to crash land on Earth and "Richy" narrowly avoids getting his brains sucked out by the timely arrival of the current Nova Prime back then. Interestingly enough that Nova series was cancelled after issue 18 as described in that editorial page. However, the cliff hanger that #18 ends on (Richy's attempted suicide) picks up in the opening pages of New Warriors 60 http://romspaceknightart.blogspot.com/2012/04/new-warriors-60-offering-moment-in-cool.html

And last up we have the latest custom figure from Chris. Now there have been customs made of Jack of Hearts but this one is truly unique because it features the costume he was sporting at the time of his epic "death" (Avengers 76 vol.3) which I actually like much more then his original. And just think, up until a few weeks ago Chris hardly knew jack about Jack http://custom777.deviantart.com/
Posted by Shlomo Ben Hungstien at 12:11 AM