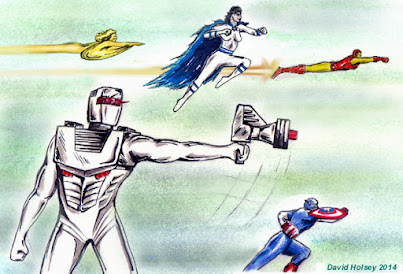 About a half dozen new pieces of Rom related fan art have appeared in the past couple of weeks or so. But with the exception of the Sal Buscema commission art I posted last week it's all been pretty mediocre. So, I just did something my self. As far as I know Sabra and Captain America never appeared together in any sort of team up situation.

That's a shame seeing that both characters are iconic symbols of patriotism from their respective countries which happen to be closely allied. Now as you can see here they could be springing into action against most any enemy. First thought would be the Dire Wraiths of course but what about HYDRA? I totally dig the idea of Rom teaming up with Captain America and Sabra to fight a bunch of fucken nazis. Speaking of Hydra and Cap. any of you notice how last week's episode of Agents of S.H.E.I.L.D totally corresponded with the events of Winter Soldier with direct references and all?

Posted by Shlomo Ben Hungstien at 11:42 AM