What an epic douche bag! 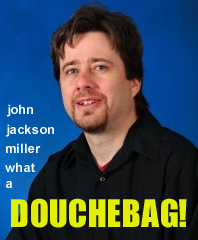 Ya know since my last posting aside from some updates to it I was really planning on taking something of a hiatus from blogging here in light of my all time low in terms of enthusiasm for the new IDW Rom series. Which took another hit by the way with the discovery last weekend of that Michael Golden cover variant featuring the "juiced up" Rom firing a ghostbusters gun. But that wouldn't be the last thing I would discover last weekend  that got on my nerves and this one demanded a strong response. There's actually two matters I want to address in this posting but let's start with this prick you see pictured here. Now what you're looking at below are some cropped pictures I took of a couple pages from a comic book price guide listing. You know how they have this kinda index listing style with a random featured titles here and there and a bit of an editorial blurb to go with it? When I first came across this price guide at a used book store I saw the ROM entry and I was like cool and gave it a read. Not so cool actually, once I realized the condescending tone to the ROM spaceknight series that the editorial blurb was written in.

The most insulting part is when he compares the dire wraiths in the pages of The X-Men with Team America (yeah as in the motor cross bike comic series) in the pages of The New Mutants. He's basically saying that the ROM spaceknight series is lame on the level of the short lived Team America Marvel 80s comic book series. I mean is this guy one pretentious douche bag or what? Anyways, screw this idiot 40 Year Old Virgin sequel casting call and this garbage he wrote. But keeping things in perspective, I've gathered in print and online a ton of articles and editorial shorts on ROM over the years all of which have been overwhelmingly positive but with any loom of grapes there's always gonna be a rotten one in the bunch. As to the price guide I've been talking about...
http://bamcc-bam.blogspot.com/2011/04/comics-shop.html


Every single ROM fan I know out there has been turned off in one way or another to some degree over what they saw in the preview pages of the zero issue. In essence we've been waiting for decades for something like this and just like every Star Wars movie that's come out since Jedi this new ROM series would not have been possible with out the enduring fandom. I feel like we deserve a book that suites our taste and not that of some millennials who were still in elementary school when 911 happened and thought the Star Wars pre-quels were pretty cool because they never saw the original trilogy.
So I ask you my friends why the reluctance to express your concerns to IDW? Why? What's all this it's "too early to judge" or this "wait and see" approach? The zero issue doesn't come out till early May and the first issue not for another two months after that. If IDW were to respond with some changes for the better thanks to fan feed back wouldn't you want to see that sooner then later in the series? So why is it such a challenge for so many of you to be a little pro-active and simply drop them a line by saying something like "Hey I'm a long time ROM fan and was really excited when you guys released the cover art but not so much when I saw what ROM looked like on the inside". Hit "send" button now, done. Seriously, it's so easy even a cave man can do it, so what's stopping you?

Posted by Shlomo Ben Hungstien at 9:39 AM