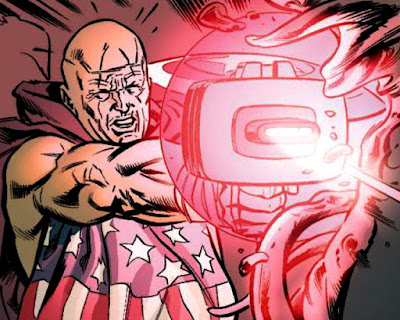 Just can't seem to stay away from this blogging shit for long for one reason or another. This morning I was browsing on the internet as I frequently do for anything interesting or other wise cool that's ROM related both new and old. That's how I found this clip art of Captain America with ROM's neutralizer. Now I happen to have Universe X #3 and based on some other clip art on the internet from the series as well as clip art that was sent to me by Gary Martin Jr. (who I haven't heard from in over a fu&%$@ month now) some years ago I know that Captain America was featured in action with ROM's neutralizer in later issues. But this is the first time I've seen this clip art I actually couldn't get to the page it was on which belonged to some marvel comics site that you had to login to. But fortunately the Google preview image was pretty big so here we are.
For Valentine's Day my wife got me this really nice set of Supracolor Soft coloring pencils. They're so smooth the way they lay down color on paper even though I'm not feeling especially creative these days I should give them a proper "test drive". So maybe within the next couple weeks I might be able to update this posting with some new fan art.

Feb. 25th Update:
Indeed you are correct Joseph (see today's comments) the clip art above as well more clip art of alternate reality Captain America blasting away with ROM's neutralizer is located in Universe X #4. But there's more, issues 10 and 11 and even a 0 and "X" issue will also give us more dire wraiths along with a ROM flash back cameo to issue #3. Plus we also find out in a editorial mention that the Universe X Galador was consumed by Galactus as opposed to ROM having tricked Galactus into trying to consume Wraith World instead as we know it. So for all of you clamoring to get a copy of Universe X #3 it looks like you'll need to dig a little deeper into your pockets get at least 4 more issues to have the full story on the ROM and dire wraith related tidbits of Universe X. A little curating birdie gave me the low down earlier this morning but more on that later. By the way I'm still intent on giving my new coloring pencil set a try with some new fan art very soon. 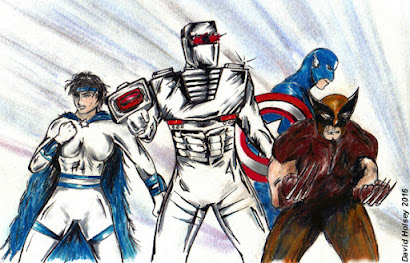 Feb. 28th Update: And here it is, the finished product.This isn't one of those fan art pieces I didn't thoroughly think through while doing the sketch. It just started with ROM and then I just kept adding characters with the right color scheme to their costumes I wanted to try out my new coloring pencil set on. Obviously I already had Captain America on my mind and who doesn't like Wolverine? Although with Sabra I added her because I'd been hoping to see some new fan art of her turn up some where for a while now but some times if you want to see something get done you just gotta do it yourself.

Ya know with all this Captain America and Sabra talk I just feel like adding this photo of a billboard that just showed up here in the San Francisco Bay Area last week.

March 3rd Update: And getting back to more ROM spaceknight and Sabra themed fan art check out this Official Marvel Universe Handbook #9 front and back cover spread redux I just happened to come across tonight. You can see the full view here . . .
http://superadaptoid.deviantart.com/art/Marvel-Universe-Old-School-118212599

P.S. As far as all this new stuff I've updated this posting with in the past week don't everybody speak up all at once now.

Posted by Shlomo Ben Hungstien at 11:45 AM