At first I was gonna update the previous posting to let any other would be interested parties know that the Onyx mini-series has been sold but then I decided to just replace the previous posting since a sale announcement posting serves no real entertainment or archival purpose. But to those of you who caught it as I said I would probably include some envelope art in the deal. Oh indeed it's such a better deal then what was being offered up at ebay and it happened with only the 2nd interested party here only the first inquirer  turned out to be a flake.

Nothing new to talk about or share here and I suspect their won't be until around FCBD. I've seen on twitter and facebook how people are just sucking up to IDW about the new series with the usual base compliments and "likes" it's like nobody dares post anything negative any where where Chris Ryall might see it. I know for a fact that most everybody is not happy with the new look for ROM rather you hate it or just think it needs some more work. I Also know many of you have been waiting for this for a long time so don't you owe it to your self to take a few minutes and let IDW know what's on your mind instead of just passively watching them  . . . do what it is they're doing like a deer in headlights? Well I certainly have, although I'm not holding my breath for IDW to ever print that letter.

February 10th Update:  WRITING WORKS!!! I will have you all know that I just copied and pasted Joseph's comment with the facebook replies into an email and fired it off to IDW and got a pretty prompt response. Out of respect for confidentiality I won't make their response public but I can assure you all that IDW is aware of the public criticism of the new look for ROM but seem to be "bewildered" about it. The correspondence actually went on as I'm writing this update which is around 11 AM pacific time. They even refereed to the manga style armor of the Jim Starlin 2001 spaceknights mini-series as rationale for this new look for ROM. I even told em straight up just go with what you guys had on the cover and how we were all happy with that and the collective WTF through out the internet when we saw the inside pages. Folks, it's clear to me IDW just doesn't get it and we're going down the Star Wars pre-quel path here with George Lucas. At what point did it make good marketing sense in the field of creative arts to not listen to the fans? For fuck's sake if you care anything for The Greatest of the spaceknights and the legacy of Bill Mantlo & Sal Buscema's creation email IDW now! Or hit em up on twitter and farcebook, it may be all for nothing but ask your self . . . what would ROM do?

Update February 13th: Thank you to Brian W. for bringing this to my attention today (see today's comments). It's nice to see an old school ROM cover artist back at it again although to be honest this isn't some of the best work from him I've ever seen especially if you compare it to the ROM covers he did in the 80s. All of which I love ofcourse but may favorite I think is issue 18 with ROM and The X-Men fighting Hybrid. Notice how the armor design here is more a reflection of the zero issue art cover as opposed to the interior? Don't know if that's what Rom's neutrilizer is gonna look like even though we don't get a really good look at it here. I hope IDW doesn't foul that up to and come up with something radically different looking not to mention that cool looking straight line stream of crimson energy that the neutrilizer discharged. If you're in the mood to see a some old school Mantlo/Golden era fan art check out what I found today over at deviant art . . .
http://www.deviantart.com/art/Rom-VS-Acroyer-587533905 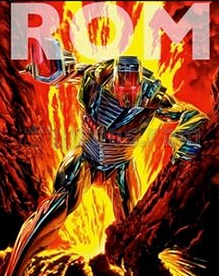 Update February 14th: Now that's more the kind of ROM I want to see. I lifted this image off of the latest Hasbro cinematic multiverse online chatter this morning. I'm not gonna get into all that but I just really like this illustration ROM looks so fucken slick not all "beefed up" and clumsy looking like that Michael Golden variant. Like I said before the minor but noticeable changes IDW had for him at first were fine with me but they just went way too far.
Posted by Shlomo Ben Hungstien at 1:30 PM