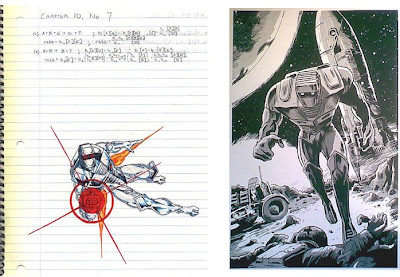 Your not seeing things on the left side there, this guy actually ended up making a kick ass rendering of ROM below his chemistry class notes. In fact you can see a whole series of note book drawings of various comic book characters at Greg's Gallery: http://www.math.hmc.edu/~levin/Personal/Gallery/E/East.html After one good look at this one it should be obvious that I can't say enough good things about this drawing. The first thing that jumps out at you is ROM's neutralizer but indeed every aspect of this drawing is so cool especially the action pose and the details in the armor. Greg's style reminds me a lot of the Pat Broderick & Mike Gustovich art team from ROM annual #1.
On the right, Francesco Francavilla has an interesting piece with some very unique qualities. Although visually not as dynamic as other works I have feature on this blog this one has the unique quality of perhaps capturing the personality of ROM better then anything else I have featured so far. You can feel the compassion and concern of the character as he approaches the dead astronaut. It was a good piece to be done in black n white and the tilt in the perspective of the scene adds an element of drama. Here we again see a good example of foreshortening. Interestingly enough I picked up this image on a website that mentioned the Francavilla piece being the favorite in the 2007 Floating World Comics Bill Mantlo Auction. He summarized the rest of the work in the auction as the following:
"I spent about half an hour just looking through all of them – some awesome, some goofy, some just plain weird, some inexplicable."
Well let me tell ya bro the the over all body of work from the 2010 auction wasn't any better.

Up next part 4
Posted by Shlomo Ben Hungstien at 5:30 PM