My first ROM issue ever was #22. It was just a random thing how I got it. I was 9 and my whole comic book collection at the time consisted of about a dozen comics (Fantastic Four, Master of Kung Fu, Marvel Two In One, Shogun Warriors, The Micronauts) which I really liked. At that point in my life my reading skills were only so that I could just pick up a few words here and there. My dad had to do most of the reading for me. I think wha 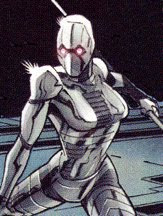 t blew me away the most about this issue at the time was the above panel (Sal Buscema's spectacular pencils) of ROM banishing that Wraith Rocketeer. To me at the time it looked like ROM was just blasting this guy in mid air with some kind of disintegration death ray. This was some hard core take no prisoners kinda shit I hadn't seen in any of the comics I had or in ones I had browsed through at stores. So from then on, even though I would come to love other more mainstream Marvel characters I was a "fan" of ROM Spaceknight. And eventually I'd would have to have all his issues and tie-ins. So nearly 30 years later here we are with IKON, the Annihilators and . . the dreaded Dire Wraiths again.
Update: If they ever did a live action ROM movie I think ROM's neutralizer beam should look like a crimson version of the tripod disintegration beams from War of the Worlds. Remember how in the movie the people who got hit turned into ash just like the wraiths did in the comics:
http://www.youtube.com/watch?v=doO-8KtoQYM&NR=1