ROM & Nova, reunited and it feels so good 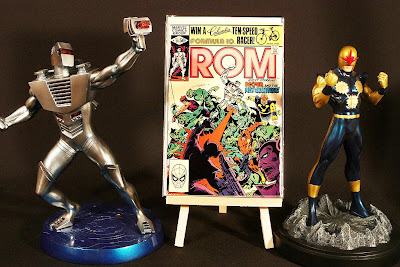 Well look what else I found out there another cool statue. Ya know I was just talking a couple of postings ago about how that sucked for Nova to have recently died. But you know how it is in the world of comic books and sci-fi when it comes to the concept of "death". Elektra, Superman and Spock were all "dead" at one point. See where I'm going with this boys and girls? I think Richard Ryder was probably the coolest Marvel teenage superhero back in the 80's and dead or alive I want to commemorate Nova's legacy. I'm sure you all know that Nova's appearance in # 23 is what made that issue among the handful of classic issues in the ROM series. If your memory on it is a bit hazy go here for an entertaining recap: http://siskoid.blogspot.com/2008/10/spaceknight-saturdays-secret-invasion.html and if you thought that was cool you may want to check out a recap of the What If issue surrounding that Nova adventure: http://siskoid.blogspot.com/2010/07/what-if-nova-had-not-given-up-his.html

And while your at it head over here to see some cool art work and sketches of various DC & Marvel characters including a few of our favorite Spaceknight I've never seen before. Take note of a cool sketch of a couple of teenage fan boys in awe of some comic book spinner racks as if they were the black monoliths from 2001. You all know how I miss those spinner racks. Damn I miss the 80's!: http://mafus.blogspot.com/search?q=rom

Oh and one last thing, I should be getting my copy of ANNIHILATORS sometime Wednesday from my local shop (Crush Comics) which means I'll have a review of it up by Wed. night (Pacific time) or first thing Thursday.
Posted by Shlomo Ben Hungstien at 12:05 AM