Just like I said, Marvel still loves ROM and they know about the fans but . . . 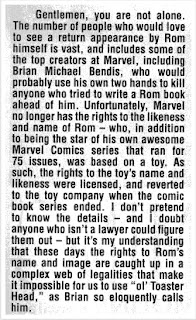 Apparently early this year this wasn't the only blog out there that was discussing the matter of the the ROM name and likeness licensing issue which was prompted by the return of  Hybrid in Avengers Academy back in March. The slamonstrobot blog authored by Snell posted on the topic with more feed back from Marvel. What you see here is from the Christos Gage in the Avengers Academy letter column.
For those of you who have been following this blog you pretty much know all of this. So really, here this information to the left is just more not so positive reinforcement on the ugly reality of the situation. And there's more:  http://slaymonstrobot.blogspot.com/2012/03/donald-duck-spacekinght.html

It's not that I disbelieve Gage in this letter column but Marvel has found a way in the past to fudge that legality as shown in Universe X #3 (2000) http://siskoid.blogspot.com/2009/10/rom-universe-x.html

Yeah I know that blows. So I endeavor to keep digging into the past to bring ROM fans today something to smile about. Although sometimes even the stuff from the past doesn't make me entirely happy. Here's a good example. I forgot I used to have this issue of Secret Wars II until I saw an entry for it in Lee's Rom Spaceknight Revisited data base site. I think the reason why I didn't keep the series or this issue was for two reasons. One is that the Secret Wars II was massively inferior to the original. As to this issue of course it was cool that they had a ROM cameo/reference to ROM#72 but it pissed me off that Al Milgrom who did some of the original ROM covers back in the day drew ROM in that horrible Steve Dikto style. God! I especially hated the way Dikto drew ROM's eyes.


Look what else I found at RSR. This is something I didn't know about before. Here's a Rom head shot from Web of Spiderman #7 during a dream sequence Peter Parker is having.

Just found Avengers 268 in a $1 bin recently. I remember when this issue first came out I happened to see it on the shelf at some dime store in San Francisco back in the day. After I thumbed through it I kinda waffled for a bit but ended up not buying it. I guess at the time this loose ROM tie-in didn't seem like that big of a deal to me since this issue came out in June of 1986 which was just a few months after the last ROM issue (#75 Feb. 1986) It featured a few pages of all these suicidal Dire Wraiths attacking some of the Avengers who had been kidnapped and temporarily stranded in Limbo by the timelord Kang. Now of course, finding something like this now is a bigger deal then it was over 25 years ago. I'm a sentimental kinda guy and for just a half a buck it was money well spent.

As you may have figured The Avengers didn't kill all the Limbo dwelling Dire Wraiths in this issue. Many others were still there and they would eventually find themselves in conflict and ultimately subjugated by another timelord in Limbo by the name of  Immortus as told in the pages of the Darkstar Winter Guard mini-series (2010).