Nov. 7th Hasbro filed for a new trademark to ROM 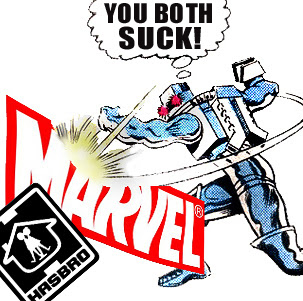 Nov.17th Update: This is now the second time I've re-written this introduction for this posting. it's looking more and more like this is nothing but hype over nothing. The news is as follows which I found at Comics Alliance:

On my wish list of things I want to see in comics, the return of ROM is pretty close to the top, but due to a notoriously complicated licensing deal, the Greatest of the Spaceknights has been trapped in publication limbo for the past two decades. Now, however, it looks like there might be some progress: On November 7, Hasbro filed for a new trademark for ROM.
And unlike many of their other properties, ROM is a lot more likely to be heading back to comics than he is with toys.

I've covered this before on CA, but unlike other Hasbro properties like G.I. Joe and Transformers, ROM was never all that successful as a toy. Despite the allure of light-up eyes and "strange electronic sounds," ROM was a flop as an action figure. It was only when Bill Mantlo and Sal Buscema brought ROM to comics that he was really successful, running for 75 issues.

The problem -- from a trademark standpoint, at least -- is that Mantlo dropped ROM directly into the Marvel Universe. Since the character was a blank slate with vague descriptions of "sending evil creatures to the Shadow Zone," everything that made ROM distinctive to fans, from the planet Galador to the Dire Wraiths to his relationship with Brandy Clark, is tied into the larger Marvel Universe and is still owned by the House of Ideas today.

It's certainly conceivable that Hasbro could be angling to bring ROM back to toys, but the real heart of the character is currently in those comics that nobody can reprint. Even if ROM joined his fellow properties at IDW, he wouldn't be able to bring those distinctive elements with him. Dire Wraiths are, after all, just Skrulls with witchity powers, and ROM even hung out with Rick Jones for five years. You don't get more Marvel Universe than that. Then again, there's nothing saying that they couldn't license him back to Marvel. You'd have to think it'd make both companies more money than the zero dollars that ROM's bringing in while he languishes in the unprintable shadow zone.

And just to add another wrinkle to the mix, rumor swirling around that Disney -- Marvel's parent company since 2009 -- is looking to follow up their $4 billion acquisition of Lucasfilm by buying Hasbro, too. If they do, then one of the many results of billions of dollars being spent by gigantic mass media conglomerates will be that ROM and the Marvel Universe will once again be back under the same roof. Of course, that rumor has been officially denied, but you never know.

Of course, the whole thing could just be routine bookkeeping to make sure that a potentially valuable trademark doesn't lapse. Either way, anything that brings us one step closer to finally getting one of my favorite comics (plus Power Man & Iron Fist #73) reprinted is worth keeping an eye on.

My apologies to Rick Hansen and Omega Agent 1 who already left comments under the previous posting expressing their jubilation. Omega Agent 1 left this link from another news story about the ROM trademark Hasbro filing: http://that-figures.blogspot.com/2012/11/news-rom-spaceknight-to-return.html