Mars Attacks, but ROM and The Enterprise stand ready 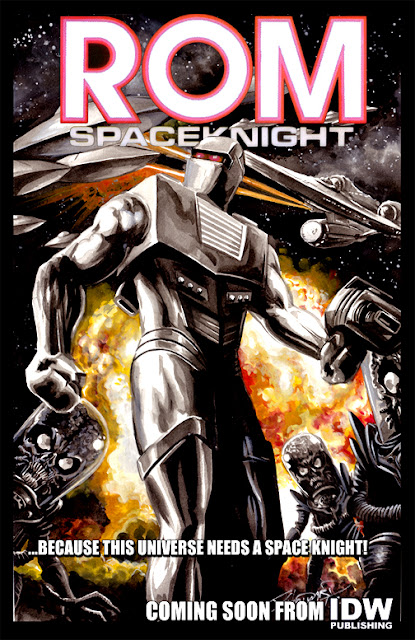 A big thanks to Lee and Zhanmann for bringing this to my attention. I don't think we're any closer to seeing a ROM come back today anymore then we were 6 months or a year ago. But I gotta tell ya all this ROM return hype has certainly not been with out it's benefits. That being of course some really nice new kick ass fan art and you all know how much I love to post that stuff here. Thank the Gods of Galador no legalities can keep us from doing that at least. This latest piece comes from J.K. Woodward check out the step by step process of how he put this together: http://jkwoodwardart.blogspot.com/

Speaking of Rom and Star Trek this sequence from ROM #43 always reminded me of of Star Trek 4 when Spock mind melded with the whales up in Sausalito which happens to be less then an hour from where I live. After having helped the Submariner defeat a Dire Wraith plot against Atlantis Rom comes across a pod of whales en route to the surface and decides to use his universal translator to interpret their songs.
As Rom flies off he laments the shitty situation whales are in on Earth with all the hunting. Back in the early and mid 80s the whole whales as an endangered species issue was much more in the public conscience. This is why I often draw analogies between ROM and Optimus Prime. Aside from being great warriors they both possessed this legendary respect for all living things. But Rom came first. He is the first and greatest of the spaceknights.

Posted by Shlomo Ben Hungstien at 11:14 AM