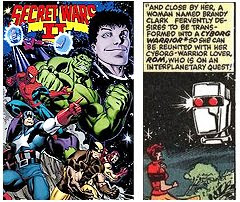 So recently I was back in San Francisco at this one particular comic shop i like to visit when I'm in "The City". I made a couple interesting discoveries. First off, did you know that the Secret Wars II Omnibus (published last year) actually contains the ROM flash back cameo panel from Secret Wars II #4. As you can see not only does the panel contain his likeness (but not a good version of it though) but it also has his name. I'm guessing this one slipped by the editors who worked on compiling the Omnibus cause as you all know there's no way Marvel can even reprint Rom's likeness legally at the moment. That would be fun to call Marvel posing as an attorney for Hasbro who wants to talk to them about that Omnibus : )
Case and point on a nearby shelf I also came across a TPB for a collection of early 80s HULK issues written by Bill Mantlo and penciled by Sal Buscema. The TBP was titled "Regression" (published this year) and Incredible HULK#296 (guest starring Rom) was among the reprinted issues in it. However, unlike the other reprinted issues 296 had been cannibalized of all the panels that had Rom in them. Needless to say knowing how the story actually reads it was quite weird to see it that way it looked rather . . incomplete.

I also went through the 3 for $1 boxes. I found a copy of Sectaurs #5 (1985) and I figured for the cost of some pocket change what the Hell why not. This short lived series (cancelled after only 8 issues) was based on an 80s toy line and was written by Bill Mantlo. I couldn't help but notice the issue had 24 pages of reading with a cover price of only 75 cents. Today, new comics go for $3 to $4 dollars and they usually have only 22 pages. And some times those new comics have one of those forward/introduction pages that's pretty much the same in every issue which means you're actually getting even less pages of actual reading. What a crock of shit and yet another compelling reason why I don't buy new comics anymore.
The Sectaurs title was not the crowning achievement of Mantlo's career. But then again he didn't exactly have much to work with considering the source material. After all it's not like we're talking about The Micronauts or the original Transformers mini-series. Now those were two great toy lines that brought out the some of the best in Mantlo.

And speaking of which for those of you who have never read that mini-series or haven't for a very long time you can check out a review on all 4 issues on the Comic's Cube blog. There's plenty of clip art featured in the review as well so enjoy your trip down memory lane: http://www.comicscube.com/2012/08/back-issue-ben-transformers-part-1.html

Just got a message on Facebook about an hour ago from Michael Mantlo who visited Bill yesterday and delivered some fan art to him I had sent. 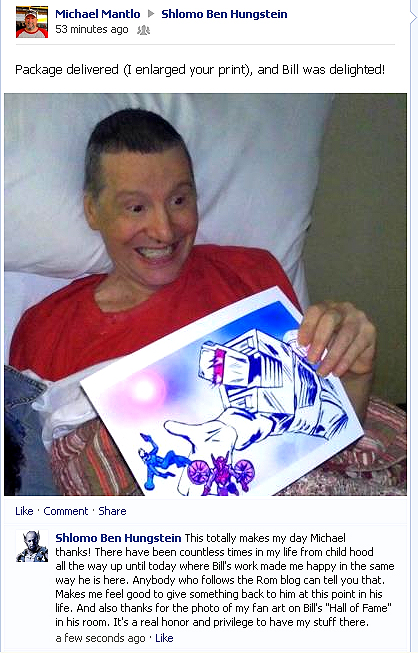 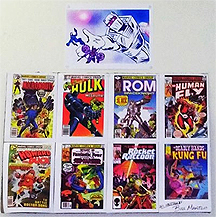 Well this certainly turned out to be a bit of a long winded posting as you know I usually keep them somewhat brief. But as you can see a lot of things of interest this week have turned up. I hope posting this stuff from Bill Mantlo's hospital room will encourage others to do the same as I did.
Posted by Shlomo Ben Hungstien at 10:00 AM