How To Draw The Shlomo Way 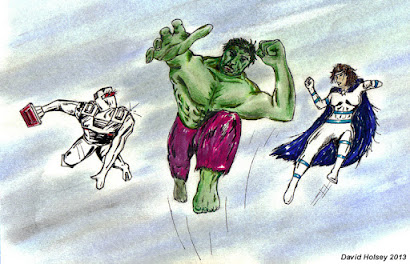 So you're probably doing a double take at this seeing as I just posting it a couple of days ago. Well yes and no. In the previous version I had posted a scan that didn't have a back ground for or the Hulk's body (except his pants) colored yet so those items I did in photoshop for time's sake. But yesterday I finally got around to finishing the whole thing by hand and it came out so very differently then before.
Do you want to know how I did this particular illustration from start to finish? Well of course you do so I'll tell you but unfortunately I can't do it with a beat like that cool Marvel rap video from last week so you'll just have to read on.

1) First, put a hole in the box and then you put your . . whoops wrong explaination :) Pretty much like any other illustration this started as a pencil sketch.
2) Once I got it to more or less look the way I wanted it to I went a head and inked it. And if you're saying to your self about now "what do you mean you inked it?" then you've seen Chasing Amy one too many times (not really that movie rocks!).
3) All the color areas on ROM and Sabra were done with fine point coloring pens. So was the Hulk's pants.
4) Next came the Hulk's skin which I did using a combination of pastels (coloring chalk), coloring pens and coloring pencils.
5) And the last step was putting in the background which was just pieces of clothe with pastel powder on them smeared across the paper.


Well even today Rom just seems to turn up in the damndest of places rather it be a rap song on Youtube or in geek magazine. A big thanks to Rick "smash" Hansen for the heads up on this which I just had to update this posting with for obvious reasons. The first half of the ROM entry is basically just a run down of the toy and comic book history nothing you all don't know already. Interesting that despite being well aware of the character rights legal issue Geek magazine never the less published the cover of ROM #1 which as far as I know they shouldn't have been able to do legally speaking. I guess like IDW Publishing earlier this year with that Rom vs Mars Attacks splash page they just didn't give a shit. It seems every other publisher out there has a bigger set of stones than Marvel which won't even give us a cameo of Rom even now that he's human.

Posted by Shlomo Ben Hungstien at 12:24 AM