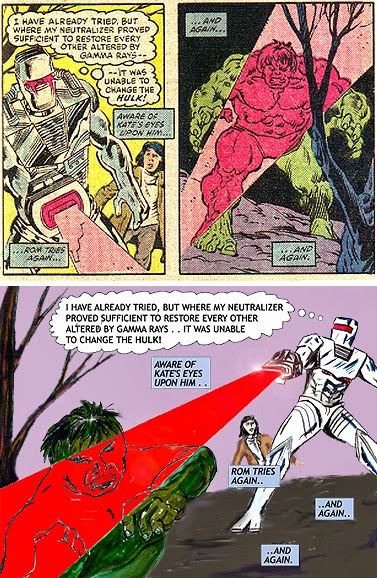 I did this last year for the Repaneled blog while it was still being updated. For some reason today I wanted to mess around with it a bit. I made some minor tweaks here and there but mostly I made some changes to the back ground color which I was never quite satisfied with when I first drew this. I also added the image of Kate and a tree which I didn't have the first time around. This scene is from Incredible Hulk #296 (Buscema/Mantlo). At the top of the right hand column you can find a link to the original.

Moving on to another issue of The Incredible HULK that Bill Mantlo and Sal Buscema worked on. I've blogged a little bit before about issue 286 back in September last year and how it was loosely based on an old Out Limits episode written by Harlan Ellison called "Soldier". But what I didn't know at the time was that this issue turned into something of a controversy. Please read this short article it shouldn't take you longer then 2 or 3 minutes to get through http://www.sequentialellison.com/bibliography/?p=49 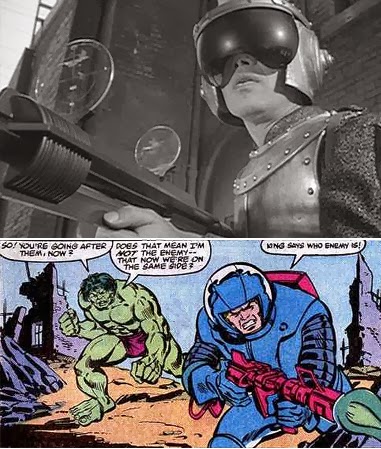 The Outer Limits episode can be found on Youtube easily enough just as a full synopsis on issue #286 can be found on the Marvel wikia site. According to jim shooter the fall out from this issue was the result of an act of plagiarism on the part of Mantlo. But I've read the issue and seen the episode and for me the issue always came off as more of a tribute to Ellison's work as opposed to a blatant rip off.  But I'm more inclined to believe that given the tenuous work relationship Mantlo had with shooter along with shooter's over all reputation for being something of an asshole. Why Ellison was not given a foot note in this issue or other wise contacted before it was written I can't say for sure. But still I like how Mantlo took the very basic aspect of this Outer Limits episode and weaved into the fabric of the Marvel universe which included Marvel characters like Kang that had nothing to do with the episode. In a perfect world we would get to hear Mantlo's side of the story but of course that's not possible. Opinions anybody?

I don't care if you don't like rap or hip hop. If you don't find yourself moving to this awesome Marvel Comics rap song then you might be dead with out knowing it yet. The whole thing is great from start to finish but the line  " . . . readership is ready for Rom to return . . " at exactly 1:30 totally rocks! I dunno who these guys are that made this video but clearly this is just more proof of an enduring fan base for the greatest of the spaceknights   https://www.youtube.com/watch?v=egQ3k3Kltns